Widener University did not have to look far for its new football coach as it picked Bobby Acosta to lead the Pride, which has won two national titles and advanced to the quarterfinals of the NCAA Division III Tournament in 2012.

Acosta arrives after five seasons at The College of New Jersey, where he was the offensive coordinator, wide receivers coach and tight ends coach. He was responsible for molding one of the area's top offenses, served as the team's academic advisor, was its strength and conditioning coach and oversaw video editing.

The Lions' offense flourished under Acosta, especially in 2011 when it went 7-3 and recorded a 27-21 win over No. 6 Montclair State. That squad ended the season averaging 185.5 passing yards per game, 176.7 rushing yards per contest and 24.6 points per game.

"We are impressed with Bobby Acosta's accomplishments both on and off of the football field," said Widener University President James T. Harris III. "His role as academic advisor, his community outreach experience, and his track record of developing the leadership skills of student athletes aligns perfectly with the Widener mission. He also has an appetite for winning football games which is important to our football tradition."

"I'm very excited," said Acosta. "As soon as I heard Widener opened up, I was attracted to the position. We have tremendous tradition and we can attract the best of players in the area. When I talked to Jack (director of athletics Jack Shafer), I told him that nothing was broken. My main goal is to play for championships and to attract top quality student athletes. I'm very excited for the opportunity."

Acosta's work at TCNJ was not limited to football. He also helped secure corporate sponsorships for the athletics department, was a site liaison at many home events, worked with the Alumni Affairs Office on numerous events, served as facility coordinator for the Fitness Center, was a campus disciplinary board member and coordinator of the school's community outreach program that included the Special Olympics.

Acosta also spent two seasons as the tight ends coach with the University of Delaware from 2007-08 as part of a staff that helped develop eventual Super Bowl quarterback Joe Flacco. He was also the academic advisor for the team which played for the 2007 NCAA Division I-AA national championship and was selected as the ECAC Team of the Year.

In the summer of 2010, Acosta worked in preseason camp with the Cleveland Browns as part of a program mentoring and offering professional development to college coaches. He also was part of a coaching internship with the New York Jets in 2008 and has worked camps with both the Jets and Lafayette College.

Acosta also served as the defensive backs coach at Rowan University and the head coach at both Monmouth Regional High School and Marlboro High School.

The Pride last season went to the NCAA Tournament for the 13th time and advanced to the quarterfinals for the 10th time, which includes NCAA titles in 1977 and 1981. 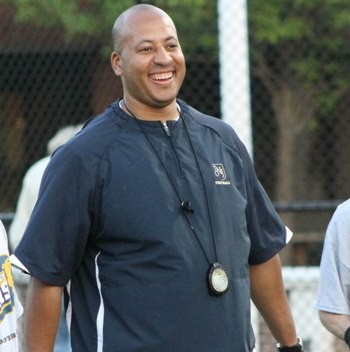