Urban Chosen As New Dean of MTSU College of Business

Dr. David J. Urban will be the next dean of the Jennings A. Jones College of Business at Middle Tennessee State University, school leaders announced Thursday.

Urban, who is currently executive associate dean and a marketing professor at the School of Business at Virginia Commonwealth University in Richmond, Va., was chosen from among three finalists brought to campus for interviews. Those finalists were picked from 54 initial applicants in a search process that began in early November 2012.

Jim Burton, dean of the college for 13 years, will step down as dean on June 30. He will remain with the college in an emeritus role.

Urban, who starts on July 1, comes to MTSU after serving in various roles at VCU's School of Business, in his current role since 2010 and before that as interim business dean and chair of the Department of Marketing. He thinks the similarities between the schools - large, public universities with diverse student bodies in growing regions - will make the transition smoother.

"I'm very excited. I think this opportunity is a great fit for me personally," Urban, 57, said. "I'm extremely impressed with everyone I have met and worked with so far at MTSU and the Jones College."

"MTSU is widely recognized as a major university that is 'on the move.' It is located in the middle of a thriving area of the state. I have had significant experience working with businesses and with state and local government entities in economic development and marketing. I also have a track record of furthering international and cross-disciplinary partnerships. MTSU and the Jones College provide an ideal setting for me to continue to lead these types of efforts."

An executive firm was hired to help with the application process, then an 18-member search committee chaired by MTSU alumnus Paul W. Martin Jr. narrowed the applicants down to the three finalists.

Urban takes the helm of a business program that boasts more than 125 full-time faculty, more than 3,000 undergraduate majors and more than 500 graduate students.

"Dr. Urban understands the important role that the Jones College plays in support of business and economic development in our region and state," MTSU President Sidney A. McPhee said. "His experience and vision will allow us to build upon our successes and grow the college's legacy of scholarship and service. He has a proven track record of developing strategic partnerships with businesses."

Before making the decision, McPhee and Provost Brad Bartel accepted feedback from those in the university community who met with the finalists or attended public forums on campus.

"MTSU is excited to have Dr. Urban join us as Dean of the Jennings A. Jones College of Business," Bartel said. "He has the experience, administrative skills and vision to lead the College to new heights of curricular innovation, increased private-public partnerships, and even higher quality and reputation." 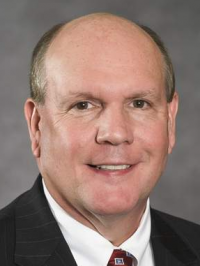