Todd Thurman, an award-winning and experienced administrator and coach with a proven track record of success, has been named director of athletics at Metropolitan State University of Denver.

Thurman, the director of athletics at Southwestern Oklahoma State since 2008, emerged from a strong field of candidates. Dr. Janine Davidson, president of MSU Denver, made the announcement Friday. Thurman's official start date is July 1.

"I would like to thank President Davidson, the search committee and all who took part in the interview process for allowing me to join and serve the Roadrunner family," Thurman said. "MSU Denver has a great reputation for athletic and academic success, and I am very excited to work with our leadership to prepare the Athletic Department for a successful future!"

"Todd's commitment to supporting department staff and encouraging students' academic and athletic development aligns perfectly with our values here at MSU Denver," Dr. Davidson said. "His experience as a successful coach, leader and mentor make him an ideal addition to the university community."

Thurman also served as head coach for the Southwestern Oklahoma State men's basketball program from 2006 through 2009. During that time, the team qualified for the conference tournament all three years, and the program had a 100 percent graduation rate. Thurman was recognized as Lone Star Conference Coach of the Year in 2008 and was named administrator of the year by the Southwestern Oklahoma State student body in 2015.

He expects to have similar success at MSU Denver.

"I see unlimited potential, with so many opportunities," he said. "I know it's a professional sports town, but I see chances to make it as great as it can possibly be.

"Another thing that drew me to MSU Denver is that I am so impressed with Dr. Davidson and her cabinet. They show so much proactive and progressive thinking. Because of that, I see great things for the future."

Joining MSU Denver during the COVID-19 pandemic will make for an unusual transition, but Thurman is committed to quickly building relationships with employees and engaging student-athletes.

"I look forward to meeting with MSU Denver coaches and support staff face-to-face once it becomes safe to do so," he said. "During this unprecedented time, our priority is constant communication with our student-athletes to make sure they remain focused on social distancing while also preparing for the future, so we can hit the ground running once we are cleared to resume operations."

Thurman said working through the changing landscape will obviously be an immediate issue to address.

"There's so much to do surrounding what it will look like when campus is re-opened and when we bring the student-athletes back," Thurman said. "That will encompass our lives for a while. And once I start, I'll talk to our coaches and staff and find out what their needs are, then we'll roll up our sleeves and work hard to get them the resources they need to be successful.

"If you talk to 10 people about what we need, you might get 10 different answers. So we'll prioritize our needs, devise a plan, find our resources and attack."

Thurman is also a proponent of community service as a means of boosting awareness and success.

"I want to do everything I can to get the Roadrunners out in the public," he said. "They need to see us, see us serving, being part of the community. That opens door. We want to show where we are and who we are."

Thurman's coaching career began at Southern Nazarene (Okla.) in 1987, and he has since held assistant or head coach positions at Central Oklahoma, Oklahoma Christian and Wayland Baptist (Texas).

Thurman also played professional basketball in Argentina, the Philippines and the United Kingdom.

Another highlight of the Thurman era came in January, 2014, as Southwestern Oklahoma State played its first games inside the brand-new Pioneer Cellular Event Center, a 93,000 square foot arena that serves as the home for the Bulldogs' basketball and volleyball teams, while also doubling as an all-purpose venue. The Pioneer Cellular Event Center also houses offices for Bulldogs athletics staff and coaches.

Thurman led the university and the City of Weatherford in campaigning, fundraising, designing, and building the facility.

Thurman led the campaign for Southwestern Oklahoma State to be a founding member of the Great American Conference during its first year of competition, the 2011-12 academic year.

The entire department was elevated under the direction of Thurman. An increased focus on fundraising led to renovations of facilities for all programs, and the department budget tripled over six years.

His hires include GAC coaches of the year in men's and women's basketball, football, soccer, golf and baseball as well as a softball Olympic gold medalist.

Thurman arrived at Southwestern Oklahoma State in 2006 as the school's men's basketball coach. He quickly won over supporters with his fast-paced, high-scoring style of basketball. Thurman's teams were consistent winners, averaging better than 19 wins in his three seasons. His last team advanced to the Lone Star Conference tournament championship, a first in the school history.

Before Southwestern Oklahoma State, Thurman went 131-82 in seven seasons at Wayland Baptist (Texas) of the NAIA. He led the Pioneers to four NAIA National Tournament appearances.

He worked as an assistant coach for nine seasons at his alma mater, Southern Nazarene (Okla.), where the Crimson Storm earned tournament trips regularly in both the Sooner Athletic Conference and NAIA. He also served as an assistant at Central Oklahoma and Oklahoma Christian in the early 1990s.

Thurman had an illustrious playing career and went on to play several years professionally in England, Argentina and the Philippines during the mid-1980s.

An all-state selection at Yukon (Okla.) High School, Thurman led the Millers to the 1979 state championship and he went on to earn all-American honors at nearby Bethany Nazarene (Okla.). He led Bethany to its first NAIA title by scoring 39 points in the 1981 championship against Alabama-Huntsville. He was inducted into Southern Nazarene's inaugural Athletic Hall of Fame class in 2011.

"I'm excited to be part of the Roadrunner family, and I think this is going to be a great match," Thurman said. "I'm very enthusiastic and very passionate about what I do. I can't wait to dive in a be a part of this." 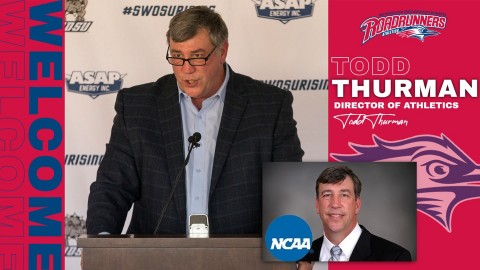