COLUMBIA, Mo. – University of Missouri President Mun Choi announced today that Desiree Reed-Francois, athletics director at UNLV, has been named as Director of Intercollegiate Athletics for the university. Reed-Francois was selected following a search led by UM Curator Jeff Layman and assisted by Parker Executive Search.

"This is a transformational day for Mizzou Athletics," Choi said. "Desiree Reed-Francois brings an unsurpassed passion for student-athletes and bold, visionary skills that will propel a championship culture at MU. As a proud member of the SEC, we are energized to go into the next era of Mizzou athletics with Desiree Reed-Francois at the helm."

"It is truly an honor to join Missouri's flagship institution, and I am extremely grateful to search committee Chair Layman and members of the search advisory committee for this incredible opportunity," said Reed-Francois. "The University of Missouri is a world-class academic institution with a strong commitment to athletics, and a resolve to further enhance its athletics programs to achieve elite national status in all of our endeavors. We have a proud and storied tradition; we compete in the premier athletic conference in the country; and, perhaps most importantly, we have a collective desire to be great. My family and I are excited to join the Mizzou Family, and I cannot wait to get started. Go Tigers!"

"She is a tough, dynamic, innovative leader who can help build upon Mizzou's successes and position us to regularly compete for championships in the SEC and beyond. The SEC is the toughest conference in the nation, and we are poised for continued success with Desiree as our leader," said Layman, who was chair of the search committee. "I'm indebted to members of the search committee for their tremendous effort. We had an exceptionally strong pool of candidates that demonstrates the bright future of Mizzou Athletics."

"We've taken an incredible step forward," said Darryl Chatman, chair of the UM Board of Curators. "I'd like to extend my welcome and congratulations to Desiree Reed-Francois and Mizzou. This is a fantastic hire, and I'm excited about the future. Our student-athletes compete in the nation's toughest conference and always have a national championship in their sights. I'm excited for our student-athletes, our university, our fans, our supporters and our state. We are building great things here at Mizzou."

"Desiree brings a variety of quality experiences to student-athletes as a leader on many campuses and in many conferences," said Greg Sankey, commissioner of the SEC. "As she continues to build the University of Missouri athletics program, I look forward to working with her in her new role as we continue the progress of the SEC – the strongest conference in the country."

Reed-Francois oversaw the opening of a new, $35 million football complex and successfully negotiated a joint use agreement with the NFL's Oakland Raiders for UNLV's use of the new $2 billion Allegiant Stadium. During her time at UNLV, she has completed or implemented more than $70 million in facility upgrades.

She also has proven fundraising skills, with UNLV Athletics raising more than $60 million, including an $8 million estate gift, the largest estate gift in the school's history. During her time at UNLV, football season ticket sales and premium revenue has jumped by 50% and 70% respectively, and Reed-Francois introduced a new apparel agreement with Nike, all with a focus on creating a strong fiscal foundation for the business operations of UNLV Athletics.

Reed-Francois earned a bachelor's degree from UCLA and a juris doctorate from the University of Arizona College of Law. She is a member of the State Bar of California and taught law classes at the University of Tennessee and at Santa Clara University. Prior to her work in college athletics, Reed-Francois worked as a legal associate for the Oakland Raiders and the NFL's Management Council.

She also has participated in the Division I Athletics Directors Leadership Institute and Fellows Program, the Women Leaders in College Sports' Executive Institute, and she currently serves as vice chair of the NCAA Baseball Selection Committee and formerly was a member of the College Football Playoff Committee's operations committee. In addition, Reed-Francois is a board member of the National Coalition of Minority Football Coaches. She is a member of the National Association of Collegiate Marketing Administrators and National Association of College Directors of Athletics and has been a presenter at NACDA, NACMA, Women Leaders, and Sports Business Journal's annual conventions.

She and her husband, Joshua, have a son, Jackson, who will be attending MU in Fall 2022 to study journalism. 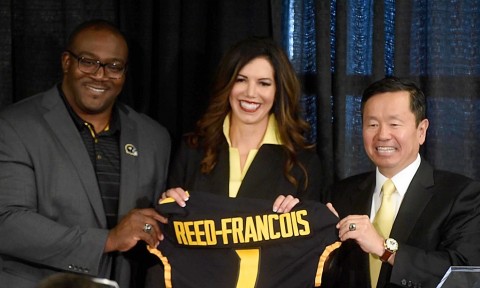