Texas A&M University-Kingsville Executive Director of Athletics and Campus Recreation Steve Roach announced the appointment of Javelina alumnus Mike Salinas as the 12th head coach and 11th full-time head coach of the Javelina football program on Friday, pending approval of the A&M System Board of Regents.

"It is with great pleasure that we are able to announce Mike Salinas as the next Head Football Coach at Texas A&M University-Kingsville," said Roach. "Mike is a proven winner at every level where he has played and coached. He brings a wide array of experiences, including a great understanding and knowledge of the state of Texas, and those experiences will prove to be valuable assets as he works to return this program to both regional and national prominence.

"Beyond his knowledge of the sport of football, Mike has proven that he can build a positive culture and will work to develop our student-athletes, both on and off the field."

"Texas A&M University-Kingsville is a special place with a tradition-rich football program," said Salinas. "It is a great honor and privilege to have the opportunity to return to Kingsville and lead the Javelina football program. I am especially grateful to President Hussey, Steve Roach, and the entire Javelina family for this tremendous opportunity, and their support and belief in me.

"Our staff and I will work tirelessly to recruit and build champions on and off the field. I look forward to meeting our student-athletes and connecting with former players to help advance our football program, and I'm excited to get to work and hit the ground running. Texas A&M-Kingsville and the Javelina program mean a great deal to me, and my wife and my family are excited to join the Kingsville community and be a part of Javelina Nation."

Salinas' experience among the coaching ranks stretches back to 2000 after he earned his bachelor's degree from Texas A&M-Kingsville. His first foray into the collegiate ranks was at his alma mater from 2002 through 2004 during the Richard Cundiff era where he coached the secondary and was part of the program that was amid four consecutive Lone Star Conference Championships and four appearances in the NCAA Division II Playoffs.

The Javelinas compiled a record of 30-7 with Salinas on staff during that stretch, including back-to-back West Region Championships and two straight appearances in the NCAA Division II Semifinals in 2002 and 2003. His efforts on the sideline led to three First Team All-America citations handed out to his position group, including Nicholas Davis (2002, D2Football.com and Daktronics) and Eddie Moten (2003, D2Football.com), as well as seven First Team All-LSC selections.

Following his time in Kingsville, Salinas made the trek north to Canyon, Texas, where he was the defensive coordinator for West Texas A&M for the 2005 season. His efforts on the defensive half of the field allowed the Buffs to experience their best turnaround ever as they claimed the 2005 LSC Championship and advanced to the NCAA playoffs for the first time in program history with a 10-2 record and the No. 15 ranking in the AFCA Coaches Poll.

While at WT, Salinas had Keon Gaither named First Team All-American by the Don Hansen Football Committee along with four members of the defensive unit named to the All-LSC teams.

From there, Salinas took his success to the next level at Sam Houston State from 2006 through 2008 where he was the special teams coordinator and the secondary coach. His work for the Bearkats saw Derrick Harris and Byran Richmond named All-Americans in 2007 as Harris landed on the Second Team All-America list by the Associated Press while Richmond was handed an All-America honorable mention citation by the Sports Network. SHSU also saw the special teams unit lead the Southland Conference with the top-ranked punt returner in the nation as Harris averaged 24.4 yards per return.

His time in Huntsville, Texas, was followed by stints at Harlingen South High School in 2009 and 2010 with another stop at the collegiate ranks in 2011 at Hardin-Simmons in Abilene, Texas, where he coached three All-American Southwest Conference players.

Salinas was tasked in 2012 with the opening of Robert Vela High School in Edinburg, Texas, where he was responsible for building the athletics program and the football team from the ground up. He was a three-time Your Valley Voice Coach of the Year from 2013 to 2015 and compiled a 31-5 record over three years starting in 2014. The SaberCats finished with a 10-2 record in the 2014 season to go with a Bi-District Championship as well as a run to the Area finals and it was the first playoff appearance for the newly-founded squad along with the first 10-win season.

In 2015 the team leapt up the charts with a 12-1 record and the No. 12 ranking in the AP High School poll that resulted in a District 31-5A Championship. Salinas guided the team to the Area championship and ended the season in the Regional finals en route to being named the District 31-5A Coach of the Year.  The 2016 season ended with a 9-2 record and a District 31-6A Championship as he received another District Coach of the Year honor. His time at Robert Vela saw the hiring of 45 members to the athletic staff as he managed a budget of $500,000.

Salinas' most recent stop came at Weslaco High School where he coached the Panthers to an 11-2 record in 2018 and added yet another Bi-District and Area Championship before ending the season in the regional finals.

Before his coaching career started, Salinas was a three-year letterwinner for the Javelina football program from 1995 to 1999. He was part of three LSC Championship and two West Region Championship teams under Ron Harms that saw the program reach the NCAA Semifinals in 1995 and 1998 and compiled a record of 44-16 over that stretch, including a mark of 32-5 in league games.

Salinas is married to Javelina Hall of Famer Lesley Zambrano, who was inducted in 2019 as a member of the 2002 Texas A&M-Kingsville softball team that went 46-18, claimed the LSC Championship and reached the NCAA South Central Regional. 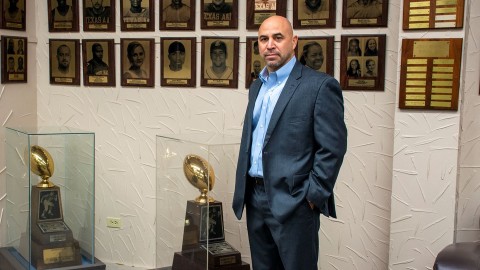