ATLANTA, GA -- Jonas Hayes, a rising star in the coaching ranks who led Xavier to the 2022 NIT Championship last week, has been named the 16th head men's basketball coach in Georgia State history.

Hayes will be introduced to the Panther Family in a news conference with Georgia State University President M. Brian Blake and Director of Athletics Charlie Cobb early next week.

The Atlanta native takes over a Georgia State program that is coming off its fourth NCAA Tournament appearance in the last eight years and will begin play in the new 7,500-seat Georgia State University Convocation Center for the 2022-23 season.

"I'm excited to announce Jonas Hayes as our new men's basketball head coach," Cobb said. "Over the past week, we interviewed multiple coaches excited about the opportunity to lead the Georgia State program.

"Jonas is an experienced leader who will build a staff that embraces our expectation of competitive success, develops men of character and engages our community positively and with energy."

Hayes spent the last four seasons at Xavier, first as assistant coach and then as interim head coach. He was elevated to interim head coach on March 16, 2022 and led the Musketeers to four straight wins, defeating Florida, Vanderbilt and St. Bonaventure before a 73-72 victory over Texas A&M in the NIT championship game at Madison Square Garden.

He helped the Musketeers to four straight winning seasons and two postseason berths, highlighted by this year's 23-13 campaign.

During his tenure at Xavier, he earned a reputation as an elite recruiter and player development coach.

Hayes went to Xavier in 2018 after six seasons at Georgia, his alma mater, where he served one season (2012-13) as operations coordinator before moving to the coaching staff as an assistant for five seasons (2013-18).

Hayes helped the Bulldogs earn postseason berths in four of his last five seasons as an assistant coach. Georgia posted three consecutive 20-win records in his first three seasons as an assistant, only the second time in program history the Bulldogs accomplished that feat. Georgia also posted its best four-year SEC win total (42 victories from 2014-18) during Hayes' tenure.

Hayes began his coaching career as an assistant coach at Morehouse College in 2005-06. He spent one season at South Carolina State and then five seasons at Belmont Abbey (2007-12) before returning to Georgia in 2012.

As a player, Hayes was a three-year letterwinner and started 41 of 88 games played for the Bulldogs from 2001-04, averaging 8.6 points and 4.9 rebounds for his career. Hayes and his twin brother Jarvis played at Western Carolina as freshmen before transferring to Georgia in 2000. Jonas helped Georgia reach postseason competition twice, including the 2002 NCAA Tournament and 2004 NIT. He started 29 games as a senior and averaged 11.9 points and 5.3 rebounds.

Hayes attended Atlanta's Douglass High School and graduated from Georgia in 2004 with a bachelor's degree in child and family development. 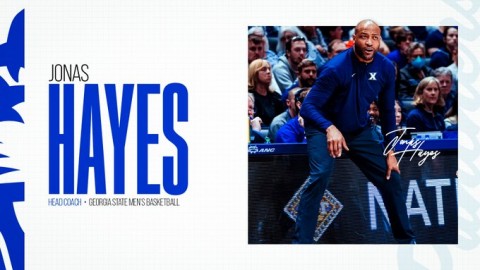