John Mack ’00, who has previously held the title of student-athlete, coach and administrator at Princeton University, will add another role to his resume – Ford Family Director of Athletics. He succeeds Mollie Marcoux Samaan ’91 who announced in May she would be stepping down to take over as commissioner of the LPGA. Mack’s first official day as Director of Athletics will be September 1.

“I am delighted that John Mack is returning to Princeton to become the next Ford Family Director of Athletics,” said Princeton University President Christopher L. Eisgruber ’83. “He is deeply committed to the educational value of Ivy League athletics, and his experience as a student, coach, and administrator make him superbly qualified for his new role. I am confident that with John Mack’s leadership, Princeton will continue its long-standing tradition of excellence in ‘Education Through Athletics.’”

Mack, who has spent time as a collegiate athletics administrator at Princeton as well as with the Big Ten Conference and at Northwestern University, has most recently spent the last decade in the legal field as a practicing lawyer.

“This is a tremendous honor and a dream come true,” Mack said. “I am grateful to President Eisgruber and Vice President [Rochelle] Calhoun for the opportunity to serve the University that has meant so much to me. Princeton offers the best combination of academics and athletics anywhere in the country. My experience as a student-athlete here was life changing, and I am excited to work with the athletics staff and the University administration to provide the same kind of experience to current and future Princeton student-athletes.”

“I am thrilled that John Mack will be leading Princeton Athletics,” said Treby Williams ’84, Executive Vice President of Princeton University. “He will bring passion, deep experience and dedication to the transformative power of the Princeton student-athlete educational experience. We are so fortunate that John is returning to Princeton to 'Achieve, Serve and Lead' once again at his alma mater!“

His career in college athletics began at his alma mater where from 2000-04 he served as Assistant Director of Intercollegiate Programming responsible for coordinating facility use and competition schedules for all varsity programs as well as event operations for home contests. In addition, he served as assistant women’s track and field coach from 2002-04, working directly with the team’s sprinters and helping lead team-wide recruiting efforts.

Mack then transitioned to a role at the Big Ten where he served as Associate Director of Championships from 2004-06. While at the Big Ten, he was heavily involved in the site selection, budget management and event oversight for the conference’s 23 annual championships. In addition he served on multiple coaches' working groups and directed a program designed to promote literacy within underserved elementary schools in Chicago.

From 2006-11, Mack worked at Northwestern, where he was Senior Associate Director of Athletics for Sales and Marketing. While with the Wildcats, he oversaw the development and implementation of marketing plans for all 19 varsity programs. In addition, he negotiated sponsorship agreements with corporate partners and managed all aspects of the university’s licensing and merchandising program. He also oversaw Northwestern’s Ticket and Sales offices as well as Media Relations, served as department liaison to CBS Sports and Learfield Sports, represented Northwestern on multiple Big Ten committees and served as sport administrator for the baseball, cross country, fencing, field hockey and women’s tennis programs.

In 2011, Mack began his legal career as a law student at Northwestern where he graduated from in 2014 with cum laude honors. While a law student, Mack was Associate Editor of Northwestern’s Journal of Law and Social Policy, captain of the Mock Trial Team, and Education Chair of the school’s Black Law Students’ Association. His legal practice focused on complex commercial litigation and products liability cases, and he is admitted to practice in state and federal court in Michigan.
Frank Sowinski ’78, search committee member and Chairman of the Princeton Varsity Club Board of Directors shared, "This was an extremely comprehensive and inclusive review of candidates and we are very pleased that John Mack will be the next leader of athletics at Princeton.  We are fully committed to supporting his efforts in continuing the long and proud legacy of athletics at this university now and in the years ahead."

Mack, a 2000 William Winston Roper Trophy recipient as the top male senior student-athlete at Princeton, captained the men’s track and field team during his time competing for the Tigers. During his four years on campus, Princeton won three straight Heps Triple Crowns, sweeping every league track and field and cross country championship from fall 1997 through spring of 2000, with Mack’s sprinting playing a key role in six total indoor and outdoor Heps titles.

Mack was twice honored by the men’s track and field program with their highest team awards, receiving The Babb Trophy in 1997 and the Bonthron Trophy in 2000 for being the freshman and overall “member of the track team who through sportsmanship, influence and performance has contributed most to the sport at Princeton.”

“It is wonderful to be able to welcome John Mack back to Princeton,” Calhoun said. “The search committee and other campus partners who had the opportunity to speak with John were truly inspired by his dedication to student-athletes, his passion for teaching and learning through sport and his vision for the positive role that athletics can play in a rigorous academic environment.” 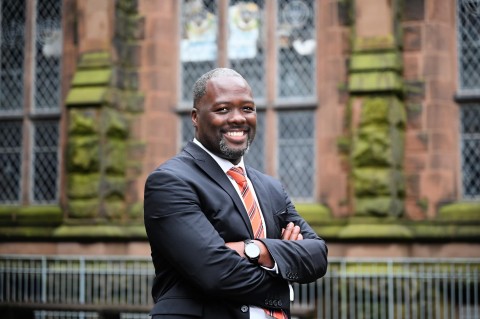