White introduced Ross—who has agreed to a five-year contract through June of 2027—to Tennessee's track & field team members Tuesday.

In addition to building out his track & field coaching staff, Ross will work closely with White to aggressively canvas the worldwide track community for an elite distance coach to oversee Tennessee's cross-country program.

A native of Dallas, North Carolina, who became an NCAA champion hurdler and seven-time All-American at Clemson in the 1990s, Ross has overseen the track & field and cross-country programs at North Carolina A&T since 2012. Earlier this season, his men's team earned the No. 1 indoor national ranking.

With 25 Aggies student-athletes—12 women and 13 men—set to compete at this week's NCAA East Preliminary Outdoor Championships in Bloomington, Indiana, Ross will make his transition to Tennessee following the completion of North Carolina A&T's NCAA outdoor season.

"When researching the best track & field coaches in the world today, it doesn't take long to find the name Duane Ross," White said. "He's built a profile that allows him to be incredibly selective in choosing his next move. Thankfully for us, the University of Tennessee has a track & field program with an extraordinary history of national championship teams, individuals and dozens of Olympians. Finding a coach with commensurate credentials was our priority, and Duane Ross is that coach.

"Tennessee track & field has been all about greatness for most of its history—both men's and women's. Duane knows what that takes and is poised to restore our program to consistent, elite-level achievement. Fitting for a hurdler, Duane has a unique personal journey marked by adversity, accountability and inspiring bounce-back. His experience and empathy resonate with young people, and the results speak for themselves."

"I've had the unique opportunity to watch and experience the athletic and coaching growth of Duane Ross," Tennessee track legend Justin Gatlin said. "I have had the honor of being an Olympic teammate and training partner with Duane. I truly believe that to be great at something, you need to be able to experience it firsthand, and that is a big reason why Coach Ross has been a truly successful athlete and coach. Whatever he touches will be successful."

Having built a world-class reputation for elite performance development, Ross has earned three United States Track & Field Cross and Country Coaches Association (USTFCCCA) Region Coach of the Year honors—twice for his men's team's performance and once for women's performance.

And in 2021, the Aggies pulled off an impressive double in the men's 4x100-meter relay, winning conference championships at both the indoor and outdoor meets.

At the 2021 NCAA Outdoor Championships, Ross coached his son to a national crown in the 400 meters, with the third-fastest time in collegiate history (43.85). At those same championships, A&T women's standout Cambrea Sturgis won NCAA titles in both the 100- and 200-meter sprints.

North Carolina A&T was the only school in the country to place its men's and women's squads in the top five of the final team standings at the 2021 NCAA Outdoor Championships, as the women tied for fourth.

North Carolina A&T's men's 4x400-meter relay squad won the 2021 NCAA titles at both the indoor and outdoor championships. And in 2019, women's phenom Kayla White won the NCAA indoor title in the 200-meter sprint and also finished second in that meet's 60-meter hurdles before being named the 2019 NCAA Division I Indoor Female Track Athlete of the Year.

Through 10 years as a Division I head coach, Ross has developed more than 30 first-team All-America performers.

"This is a great hire by Tennessee," CEO of the USTFCCCA Sam Seemes said. "Duane was someone who was very successful as a student-athlete and as a professional athlete. He has brought that same competitiveness and level of success to his coaching profession. Duane has proven himself at North Carolina A&T with the success of both the men's and women's teams there. Tennessee is lucky to hire someone as proven as he is and someone who cares deeply for his student-athletes."

Selected as Clemson's 1994-95 Athlete of the Year, Ross was inducted into the Clemson Athletic Hall of Fame in 2014.

As a Nike professional track & field athlete, Ross competed internationally for close to a decade and participated in multiple IAAF World Championships. He made the USA Track & Field Olympic team in 2004 and competed in the 110-meter hurdles at that year's Summer Olympiad in Athens, Greece.

He earned his bachelor's degree in Financial Management from Clemson in 1996 and later completed a master's degree in Sport Management and Physical Education from Aspen University in 2016. 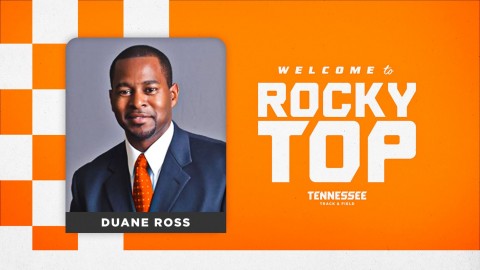