While a sports-journalism student at the University of Florida, Kelley Kish was serving an internship at a local TV station "when a lightbulb went off."

"I realized I wanted to be on the other side of the camera, impacting the stories, not just telling them," she says.

That epiphany has led to a nearly two-decade career in athletics administration at a variety of universities, both large and small. Kish has now landed at Wingate University. After a nationwide search, Wingate has hired Kish as its director of athletics. She will begin her duties on Jan. 3, replacing current vice president and director of athletics Steve Poston, who is retiring after 50 years at Wingate, the past two decades as AD.

Kish spent the first nine years of her career at the University of Florida, and she comes to Wingate after nearly two years as the senior associate director of athletics and the senior woman administrator (SWA) at Division I Winthrop University, where she is currently the interim AD.

But her heart lies at the NCAA Division II level. Wingate will be Kish's fourth Division II stop, after stints as an assistant AD/SWA at the University of Indianapolis (UIndy), associate AD/SWA at Nova Southeastern University and director of athletics at Lake Erie College.

Kish dipped her toe in the DII pool for the first time at UIndy, where she discovered the benefits of a Division II experience for student-athletes: a chance to play at a high level and compete for national titles but with a greater focus on the overall student experience.

"I'm the first one, I guess, who showed her a taste of DII," says Sue Willey, vice president of intercollegiate athletics emerita at UIndy. "She really gravitated to it and saw what the positives were of Division II. She's passionate about it and wanted to get back."

That enthusiasm stems from a desire to make the student-athlete experience exceptional.

"If decisions are student-led as you're making them, you can stand by them no matter what, because they're going to align with your values," Kish says.

"I haven't been around anyone who is as passionate about student-athletes as Kelley Kish," says Mike Mominey, director of athletics at Nova Southeastern University, in Fort Lauderdale, Florida, where Kish served as associate director of athletics/SWA for five years. "She just cares, and she cares for the right reasons."

Kish's passion for improvement – in the student experience and in her professional life – has been evident at every stop in her career. Over the years, she has served on several NCAA committees and taken part in many NCAA-sponsored professional-development programs. She is also heavily involved in Women Leaders in College Sports, of which she has been a board member for the past three years.

"Kelley has been intentional about carving out time for her own professional development, so she can better serve the student-athletes under her care, and I think that's commendable," says DeeDee Merritt, director of leadership development for the NCAA.

"Kelley exhibits an enthusiasm for collegiate athletics that is going to spill over into every square inch of our athletic department," says Wingate University President Rhett Brown. "Her dedication to student-athletes dovetails perfectly with our mission at Wingate. We are excited to welcome her to the Bulldog family."

For search-committee member Marcus Kirkland, associate head coach for men's basketball and director of diversity and inclusion for WU Athletics, Kish's experience leading diversity, equity and inclusion (DEI) efforts was a plus. Kish developed a DEI plan at UIndy, spearheaded DEI efforts at Nova Southeastern, and is chair of the Winthrop Athletics DEI working group. She also earned a certificate in DEI in the workplace from the Muma College of Business at the University of South Florida.

"Kelley's energy is infectious and will give our athletic department a boost of enthusiasm," Kirkland says. "Her efforts around diversity, equity and inclusion are second to none, and I'm excited to work alongside her to continue to elevate those efforts at Wingate. Her genuine enthusiasm for enhancing the student-athlete experience was also evident throughout the entire interview process."

Kish inherits a department that excels on the field and in the classroom. Wingate has won the Echols Athletic Excellence Award, which goes to the top overall athletics program in the South Atlantic Conference, the past 13 times it has been handed out (the Echols has not been awarded since 2019). Wingate also has the most Academic All-Americans in NCAA Division II since 2000.

And five months ago the Bulldog baseball team won the Division II national title, Wingate's second team national championship since 2016. With no need to reinvent the wheel, Kish says her first order of business is to "listen and learn."

"She's a leader who listens to her people and the wants and needs of her department," Mominey says. "She's not going to come in with a heavy hand. She's going to take what's been successful and put her own stamp on it."

"She's a consensus builder," Merritt says. "She is a great teammate, a great collaborator. She takes challenges head-on and wants to do the best that she can to make sure that all parties involved have the best outcomes. In today's environment in athletics, that's hard to do."

Kish will oversee a department that fields 23 intercollegiate teams and serves nearly 700 student-athletes. Field hockey will play its first season in the fall of 2022, taking the number to 24.

The Bulldogs have been a regional and national power in NCAA Division II athletics over the past 15 years. In addition to the 13 consecutive South Atlantic Conference Excellence Cups, Wingate is the all-time SAC leader in conference championships, SAC Scholar-Athletes, SAC Presidents' Award winners, Academic All-America honorees and All-Americans. The Bulldogs lead all of Division II in Academic All-America honorees in the 2000's.

The Bulldogs also have the only two team national titles in SAC-sanctioned sports, winning the men's soccer national championship in 2016, while bringing home the baseball title this past June. Wingate has finished in the top 30 of the Learfield Sports Directors' Cup standings each of the last six years. That includes a pair of top-eight finishes and three top-16 showings.

Founded in 1896, Wingate University is a laboratory of difference-making that serves more than 3,400 students in North Carolina. Wingate offers 37 undergraduate majors as well as eight master's and five doctoral degrees. The University is home to the Cannon College of Arts and Sciences; the Levine College of Health Sciences; the Byrum School of Business; and the College of Professional Studies, which includes the Thayer School of Education and the School of Sport Sciences.

Wingate is a leader in healthcare education, and nearly one in five Wingate undergraduate students is preparing to be a pharmacist, physician assistant, physical therapist, occupational therapist or nurse. Student-athletes on Wingate's 24 teams compete in NCAA Division II and have brought home the SAC Echols Athletic Excellence Award for 13 years straight. The University's motto is "Faith, Knowledge, Service." View current news and videos at www.wingate.edu. 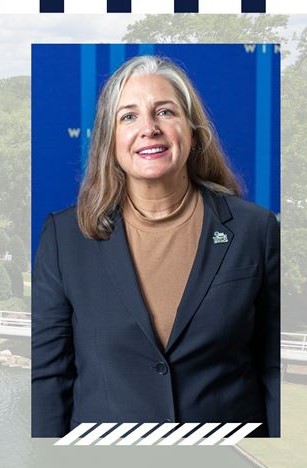