Ruud was named the 15th president of Shippensburg University of Pennsylvania on January 10, 2007 and officially began his duties on February 19, 2007. President Ruud, Bill as he prefers and is known on and off campus, is in his seventh year of service as president. Throughout a career of more than 30 years, President Ruud has been a leader at several colleges and universities throughout the nation, and he has used that wealth of experience and knowledge to lead Shippensburg on a path to academic excellence and achievement, as well as an enhanced role in the life of the region.

Since his presidency began, the University has, among other achievements, seen a positive increase in enrollment; a double-digit increase in applications, including an increase in applications from minority students; continued to have the highest graduation rate (seven years in a row) in the Pennsylvania State System of Higher Education; completed a master facilities plan that will guide the university's future for decades; expanded graduate programs to such areas as Harrisburg, Hanover, and York; and is finishing the process for an academic master plan to help the University enhance its programming. Community outreach opportunities at the University have been expanded including the Growing Edges Community Counseling Clinic that offers free counseling services to the community as well as numerous cooperative ventures with local municipalities in such areas as planning and regional development. In addition, President Ruud has also been named to various national and regional groups since joining the University. For example, he is serving n AASCU's Professional Development Committee; he served a three-year term as a member of the American Council on Education's Commission on Effective Leadership, and was appointed to the Mayor's Commission on Literacy for the City of Harrisburg – now the Capitol Region Literacy Council. He also serves on numerous community service organizations, including past Chair of the Board of Directors of the Frontier District of the Boy Scouts of America.

After a successful affirmation of accreditation (with Commendation) by the Middle States Commission on Higher Education in 2009, the university is moving forward on completion of its first Academic Master Plan that will be completed in the Fall of 2013. Shippensburg will use the accreditation report to inform its direction and strategy for its Academic Master Plan, its Strategic Plan, and its $45M Comprehensive Capital Campaign. During his tenure thus far, a number of campus improvement projects have been completed or started. Among those include renovation and expansion of Dauphin Humanities Center (College of Arts and Sciences), completion of the student recreation center, and Reisner Dining Hall, and work is progressing on such projects as the expansion of Huber Arts Center (Department of Art) and the Ceddia Union Building. There have also been major improvements to athletic facilities (Basketball floor, weight room, two new fields, swimming pool improvements) and the campus in general (New power plant with upcoming major improvement to electoral and technology infrastructure). The University has completed Phase I in a three phase all-new residence hall project – including an Honors College -- to enhance the living-learning opportunities on campus. Phase II will be completed in Summer 2014 and Phase III in Summer 2015. He was also instrumental in the university's award-winning marketing campaign that began in 2008 and focuses on words like LeaderSHIP, InternSHIP, ChampionSHIP, and ScholarSHIP. Data over the past two years reinforce that this program is bringing more students and families to the Shippensburg campus.

He and his wife of 36 years, Judy, live in the Martin House on the campus of Shippensburg University with their Cockapoo, Fuzzy. 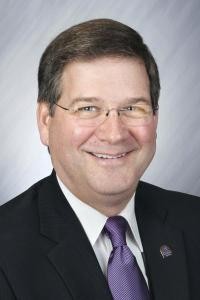