Carlson comes to Rocky Top after spending the last 10 years at Notre Dame, transforming its distance group into one of the nation's elite. During his stay in South Bend, Indiana, he guided athletes to four American collegiate records, 13 school records, 29 NCAA All-America performances, two NCAA records and three NCAA championships.

"I am beyond excited for this opportunity to build something truly special with the University of Tennessee," Carlson said. "Danny White is determined to push our program forward with an entirely unique and innovative structure. The opportunity to work with Danny, coach Duane Ross, and the entire staff is humbling and thrilling for me."

Notre Dame had more men's distance qualifiers for last week's NCAA Outdoor Championships in Eugene, Oregon, than any other school. And Irish senior Dylan Jacobs claimed the NCAA outdoor title in the 10,000 meters on Wednesday.

"I made a commitment to our cross country and distance student-athletes to deliver a world-class distance coach and a leader who will bring out the very best in them, and I believe we have checked every box with Sean Carlson," White said. "Our intent is to provide Sean and our student-athletes with every resource needed to restore Tennessee's distance program to championship form."

The last year has been exceptionally special for Carlson and his Notre Dame student-athletes. During the 2022 indoor season, Yared Nuguse and Jacobs ran the fastest times ever recorded by American NCAA performers in the 3,000- and 5,000-meter events, respectively. Nuguse's time of 7:38.13 broke Alistair Cragg's 18-year-old NCAA record, while Jacobs' 13:14.04 was the fourth-fastest time ever run in NCAA history.

At the 2020 NCAA Cross Country Championships – held in March of 2021 – the Irish men placed second as a team, securing their best NCAA placement in more than 60 years.

Carlson then helped guide two-time NCAA champion Nuguse to an NCAA record in the men's 1,500-meter during the 2021 outdoor season at 3:34.68. Nuguse went on to qualify for the Tokyo Olympics in that event.

In cross country, the Irish men claimed the program's first ACC championship in 2018 and followed that feat with successive league titles in 2020 and 2021.

A native of Buffalo Grove, Illinois, Carlson began his tenure at Notre Dame in November of 2011 as an assistant cross country and track & field coach, rising through the ranks to be named the head men's cross country coach in 2019. In March of 2022, he was promoted again to head men's track and field coach.

"I would like to thank Matt Sparks, Claire Leatherwood Slebonick, Reggie Brooks, Joe Piane and everyone who has made my time at the University of Notre Dame so special," Carlson said. "I will be forever grateful for the memories we made and what we built together in South Bend.

"I cannot wait to get to work on this new chapter of Tennessee cross country and track & field."

Carlson attended North Central College in Naperville, Illinois, and ran collegiately for the Division III Cardinals. A team captain and All-American, he led the cross country team to a DIII national title in 2009. He also won the College Conference of Illinois and Wisconsin individual cross country championship that same season. 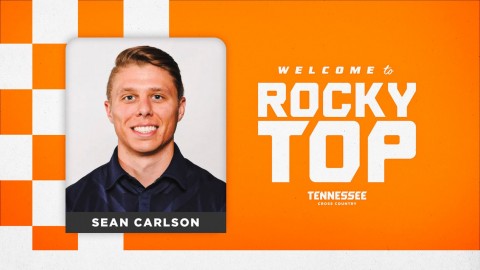