DENVER – The Western Athletic Conference Board of Directors has announced Brian Thornton as the seventh commissioner in the 60-year history of the conference. Thornton replaces Jeff Hurd, who will be ending a 10-year run as commissioner and 37 years overall at the conference on December 31, 2021.

"I would like to start by thanking Jeff Hurd for his incredible 30-plus years of dedicated service to the WAC. He has always been there through the good and the challenging times," said Grand Canyon University President Brian Mueller. "Brian is the perfect person to take the rebuilt WAC forward. His knowledge of NCAA athletics and his strong strategic view of the future is very impressive, and we all look forward to building a very bright future together."

Thornton joins the WAC following one year as associate commissioner for basketball at the American Athletic Conference. In that role, he served as the primary administrator for men's and women's basketball, including oversight of scheduling, officiating and game operations as well as compliance with NCAA governance.

"I would like to thank the Western Athletic Conference Board of Directors for the opportunity to lead this historic conference during this unprecedented time in collegiate athletics.," said Thornton.
"While the WAC name is certainly a storied one, the current mix of institutions share a common bond as growth-focused with a strong desire to compete at the highest level while also providing an elite student-athlete experience."

Thornton was a standout men's basketball player at Xavier University, where he was the 2005 and 2006 Atlantic-10 Student-Athlete of the Year, a CoSIDA Academic All-America selection and was a first-team all-conference pick for the Musketeers' 2006 Atlantic-10 championship team. He began his playing career at Vanderbilt University, where he was an SEC all-freshman selection in 2002 and played professionally for the Artland Dragons for the Basketball Bundesliga in Germany from 2006-07.

A native of Louisville, Ky., Thornton earned an undergraduate degree in business from Xavier in 2005 and added an MBA from that institution in 2007. Brian and his wife Kelsey have one daughter, Makayla, and one son, Brian Jr. (Deuce).

What They Are Saying About Brian Thornton
Tarleton State University President Dr. James Hurley
"We are excited about the leadership and future-focused vision that Brian Thornton will bring to the WAC. He is a student-athlete centric leader that will continue the growth and expansion of the WAC footprint."

Utah Valley University President Dr. Astrid S. Tuminez
"I am thrilled to have Brian Thornton as the new WAC commissioner. Coming from Utah, the #1 state economy in the US this year, UVU is eager to continue growing in athletics and to take advantage of new opportunities with our new commissioner and our dynamic peers in the WAC."

American Athletic Conference Commissioner Mike Aresco
"Brian Thornton is an outstanding choice as the next commissioner of the WAC. He is a rising star and has been extremely effective in the administration of our men's and women's basketball and has provided valuable insight and operational expertise for our coaches, administrators and conference staff on a wide range of matters. Brian's integrity, judgment, experience and knowledge of the collegiate landscape will enable him to guide the WAC to a bright future. Our entire conference, office staff and I wish him all the best and great success in his important new role."

NCAA Senior Vice President of Basketball Dan Gavitt
"Congratulations to Brian Thornton on his appointment as the new Commissioner of the WAC. Brian is a talented and polished administrator who did great work at the NCAA and the American Athletic Conference. He will provide the WAC with innovative leadership building on Jeff Hurd's successful tenure as Commissioner."

Missouri Valley Conference Commissioner Jeff Jackson
"Brian will be a great leader in the WAC. His tremendous aptitude and capacity for work, combined with a great ability to bring different groups together, will serve his constituents well in a very fluid and dynamic time in college athletics."

Xavier University Associate Athletic Director for Basketball Administration Mario Mercurio
"Congratulations to Brian! Whether as a student-athlete or staff member, Brian always represented himself and Xavier University in a first-class manor."

Louisville Head Men's Basketball Coach Chris Mack
"It comes as no surprise to see Brian named commissioner of the WAC. He's as bright and innovative as they come. He's an achiever in athletics with a tremendous mind for business. The WAC is lucky to have him." 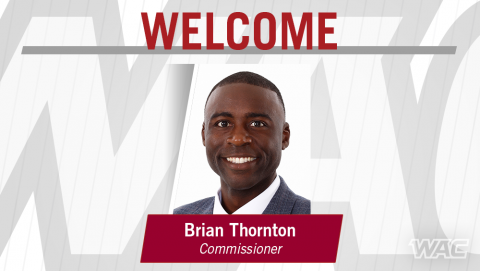