CHICAGO – University of Chicago Director of Athletics & Recreation Angie Torain announced the hiring of Todd Gilcrist Jr. as head football coach on Tuesday. He becomes the 12th head coach in UChicago football history, dating back to the program's inception in 1892.

"I am delighted to welcome Todd as our new head football coach and to welcome his wife and daughter to the Maroon family," Torain said. "During my time with Todd and from my conversations with others, his desire to have an impact on the lives of the student-athletes was evident as well as his ability to build lasting relationships with his players.

"Todd has been a part of like-minded institutions that have been successful and will bring the same mindset and values to UChicago," she continued. "I'm excited to see how the culture created by our wonderful student-athletes continues to grow under the leadership of Todd and his staff."

The 2022 fall season will be Gilcrist's 11th year as a collegiate football coach. He arrives in Hyde Park after a three-year tenure at The College of the Holy Cross. Gilcrist was the pass game coordinator and wide receiver coach for the Crusaders, who compete within the NCAA Division I Football Championship Subdivision (FCS). He led the offensive staff in pass game creation and weekly game plan installation.

The Crusaders possessed a cumulative record of 20-10 over the past three seasons with Gilcrist on staff. Holy Cross won three-straight Patriot League titles with a 13-1 record in conference games. The 2021 Crusaders put together their most successful season in 30 years – they posted a 10-3 overall record, a 6-0 league mark and advanced to the second round of the NCAA FCS playoffs. The offense averaged 32.2 points per game with five games exceeding 40 points.

Prior to Holy Cross, Gilcrist spent four seasons on staff at Columbia University (NCAA Division I FCS). He was the running backs coach in the 2015-16 seasons and the wide receivers coach during the 2017 and 2018 campaigns. Four Lions from his positional groups earned All-Ivy League honors in that time. Wide receiver Josh Wainwright set a new school record with 1,001 receiving yards in 2017. On the recruiting front, Gilcrist was instrumental in bringing in three classes that placed in the top 25 of the FCS recruiting rankings. Columbia's 2016 recruiting class was ranked No. 3 nationally within the FCS.

Gilcrist also has coaching roots within NCAA Division III. In the early years of his career, he served as the wide receivers coach at Carnegie Mellon University (2014) and Thiel College (2013). He led the creation of the pass game plans at both programs. Additionally, Gilcrist was the defensive backs coach at Maine Maritime Academy (2012).

"My family and I are truly honored to join the UChicago family and Hyde Park community," Gilcrist said. "This is a tremendous opportunity to lead a historic football program at a prestigious, world-renowned academic institution, that I do not take lightly. The UChicago alumni, players, and administration have a deep-seated love and passion for this University and the football program's success. Together, we will build a championship program focused on developing well-rounded student-athletes, who not only strive for elite athletic performance on the field, but also academic excellence and positive engagement with the Chicago community while off the field. I want to thank our Athletic Director Angie Torain and the entire UChicago search committee for their support and affording me and my family this amazing opportunity.

"I want to thank Head Coach Bob Chesney, the coaching staff, and all of the amazing players of Holy Cross football for the great relationships and memories that we forged over the past three years," he continued. "Bridget, Riley, and I are forever grateful to the Holy Cross community and city of Worcester."

As a student-athlete, Gilcrist started his collegiate career as a wide receiver at Duquesne University and went on to play wide receiver and safety at the University of Pittsburgh. The Panthers won the 2010 Big East Championship and made three-consecutive bowl game appearances during his time on the team. He received his bachelor's degree in Digital Communications and Media from Pittsburgh in 2012. 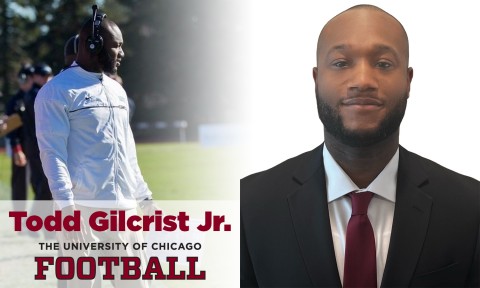