Dr. Mikki Allen has been named the next director of athletics at Tennessee State University. TSU President Glenda Glover made the announcement today during a virtual press conference that included top administrators, head coaches and alumni, along with members of the press.

Allen comes to TSU after 11 years in sports administration, including his most recent position as the assistant director of athletics for Player Relations and Development at the University of Tennessee. Under his leadership, Allen set a new standard in the Southeastern Conference by creating a comprehensive development and transitional assistance program for Tennessee football student-athletes. The program was designed to guide football student-athletes from enrollment through their transition to post-football professional careers.

“With the retirement of AD Teresa Phillips after a stellar career here at TSU, it was essential that we find a leader that could build upon our recent successes, as well as our storied legacy of winning,” Glover said. “I believe we have found that in Dr. Allen. He’s a successful leader who puts student-athletes first, builds strong relationships both internally and externally from his success as a fundraiser, and just as important, Allen is committed to the development of coaches and staff to achieve at a very high level. We are extremely excited about the future of TSU Athletics.”

Allen, a four-year letterman and member of the UT 1999 National Championship Team, has strong ties to TSU, where he earned his master’s degree. His wife received her undergraduate and graduate degrees from the university as well.

“I’m honored that President Glover has entrusted me to be the new Director of Athletics for Tennessee State University. To have the opportunity to be reconnected to our TSU family means everything to my wife, Jesus, and ME,” Allen said.

“Tennessee State University is very special to my family’s legacy. This is about returning to an institution that I not only have a great passion for, but one that has been both impactful and transformative throughout my life. I have an incredible amount of respect and admiration for the work that Teresa Phillips accomplished during her 16-year tenure.  As the new Director of Athletics, I look forward to carrying the torch forward and elevating the sports programs at TSU to the top of the OVC pyramid.”

After a brief stint in the NFL due to injury, Allen joined the Tennessee Athletics staff in 2009 and excelled during multiple record-breaking fundraising years.  Serving as the Director of Athletics Development, Allen played an invaluable role for Tennessee Athletics in helping to secure more than $20 million in capital campaign gifts during his tenure as an athletics fundraiser.

The new AD will lead TSU Athletics that consist of 15 programs, and will officially begin in his new position May 1.  UT Director of Athletics Phillip Fulmer called Allen a born leader and winner.

“Tennessee State is getting a man of great integrity and a born leader,” Fulmer said. “Mikki has made impactful contributions across several departments here at Tennessee over the years and has earned the respect from administrators and staff all throughout campus. The vast experience he’s gained has him well prepared to lead a department of his own. A former national championship student-athlete, he knows firsthand what a winning culture looks like. I know he’ll work tirelessly to build relationships and develop robust support systems to deliver a first-class student-athlete experience.”

Allen replaces Teresa Phillips, who is stepping down after 16 years with the university. Student-athletes excelled in the classroom under her leadership and posted some of the school’s highest graduation rates.

"I’m very excited about the announcement of my successor as athletic director," commented Phillips. "Dr. Allen brings great energy and the ability through his development expertise to take our programs to the championship caliber expected of TSU. I wish him much success and am looking forward to great things ahead."

Allen’s wife, Jekia, is a ’99 TSU graduate and currently is an elementary school Assistant Principal.  The couple has two children, Mikenzie Rae (12) and Jansen Michael Allen (8). 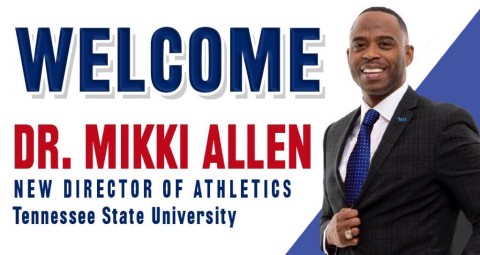