“I’m grateful to Brian White and President Kelly for their belief in me to lead the football program at Florida Atlantic University,” Taggart said. “I’m looking forward to long-term success here. I think our players and the university deserve that commitment. Family is extremely important to me. I couldn’t do what I do without their love and support and all of us are looking forward to being here in Paradise for the foreseeable future.”

A Florida native, Taggart is considered one of the best offensive minds in the country and has proven to be very successful on the recruiting trail.

“I couldn’t be more excited to have Coach Taggart on board to lead our football program,” White said. “Coach Taggart is a proven program builder who will develop strong relationships with our student-athletes and develop them as future leaders. His deep relationships around the state of Florida and the nation will be vital in recruiting as well. The traits he brings to the table will allow us to continue building upon our recent success.”

Taggart comes to FAU after serving as head coach at Florida State University. He landed the 11th-ranked recruiting class in the nation in 2018, a class that yielded a Freshman All-America defensive back and a wide receiver who set FSU records for receiving yards by a freshman. Five Seminoles earned All-ACC honors following the 2018 season, including a first-team selection and first-round selection in the 2019 NFL Draft.

The Seminoles passed for 3,241 yards in 2018, the most by an offense under a first-year head coach in program history. The team’s average of 270.1 passing yards per game ranked third in the ACC and 28th in the NCAA. FSU produced two different 350-yard passers in the same regular season for the first time in program history in 2018.

Taggart has led remarkable turnarounds at several of his previous head coaching stops. He also has a track record of offensive success. From 2015-17, his offenses had the fourth-highest points-per-game average among FBS head coaches, behind only Mike Gundy, Kliff Kingsbury and Urban Meyer.

In 2017, Taggart took over at Oregon, which had been 4-8 the previous season. He led the Ducks to a 7-5 mark and a selection to the Las Vegas Bowl. Oregon ranked in the top 30 in the NCAA in 15 different statistical categories, including boasting the 12th-best rushing offense in the country rushing for 251.0 yards per game and the 18th-highest scoring offense averaging 36.0 points per game. On defense, the Ducks ranked 24th in the country in third-down defense allowing a .333 conversion percentage and 27th in fourth-down defense at .417.

Taggart took over a USF team in 2013 that had won just three games in 2012. He turned the Bulls into one of the most exciting programs in the country by 2016. In his final year at the helm in Tampa, Taggart led USF to a 10-2 record and No. 25 ranking in the final regular season poll, the team’s first ranking since 2011 and only the second time in program history the Bulls were ranked at the end of the regular season. His offense averaged 43.6 points per game, ranking fourth in the country, and was fifth in the nation averaging 291.8 rushing yards per game.

With Taggart serving as the primary playcaller, his offense broke 33 USF program records in 2016, including scoring, total touchdowns, total yards, rushing yards, yards per play, yards per rush and points per game. He coached the American Athletic Conference Offensive Player of the Year and the Bulls tallied a program-record 10 all-conference selections.

Taggart helped build the offensive juggernaut with the top-ranked recruiting classes in the AAC in 2013, 2014 and 2015. He also oversaw a vast improvement in the classroom while at USF, which improved its Graduation Success Rate in each of his four seasons and boasted a program-record 38 academic all-conference honorees in 2015.

Taggart’s first head coaching position was perhaps his best rebuilding effort, taking over a WKU program that had lost 20 games in a row. He quickly led his alma mater to its first two winning seasons since transitioning from FCS to FBS. In 2012, Taggart led the program to its first bowl game. Taggart also once again made a splash in recruiting as he signed the top class in the Sun Belt in 2010 and 2011. He served as the Hilltoppers’ head man from 2010-12.

Prior to being named head coach at WKU, Taggart was the running backs coach at Stanford from 2007-09, where he helped tutor 2009 Doak Walker Award winner, Pac-10 Offensive Player of the Year and consensus first-team All-American Toby Gerhart. That year, Gerhart’s average of 144.7 rushing yards per game helped the Cardinal rank second in the Pac-10 and 11th in the nation with 224.3 yards per game on the ground and break the school’s 60-year-old single-season rushing record with 2,481 yards.

Taggart was an assistant coach at WKU from 1999-2006. He coached the wide receivers for one season, before moving over to mentor the quarterbacks for the remainder of his tenure as a Hilltopper assistant coach. He added co-offensive coordinator duties for the 2001 and 2002 seasons and served as assistant head coach for his final four years.

Taggart helped direct an offense that set school records with 432 points, 5,749 yards of total offense and 263 first downs on the way to the 2002 NCAA Division I-AA national championship. That season, the Hilltoppers ranked second in the nation in pass efficiency and sixth in rushing yards per game. The offense saved its best performances for the playoffs, where it averaged 38.8 points per game in the four postseason wins.

Taggart transitioned to coaching after authoring a playing career that ranked among the best in WKU history. He was the program’s starting quarterback all four years and broke 11 school records, highlighted by his 47 rushing touchdowns, and left school holding the NCAA Division I record for rushing yards by a quarterback. He also ranked second in program history with 286 points, a 127.71 pass efficiency rating and 3,997 rushing yards and tied for third with 17 100-yard rushing games and for fourth with 30 touchdown passes.

He earned his bachelor’s degree in social sciences from WKU in 1998. In 2009, he was inducted into the WKU Athletic Hall of Fame and earned the distinction of being honored as one of three captains on Western Kentucky’s All-Century Team in 2018.

Taggart also had a highly successful prep career at Bradenton’s Manatee High School. There, he led the Hurricanes to a 5A state title as a junior and was a first-team all-state and all-conference selection as a senior after directing Manatee to the state championship game for a second straight year.

Taggart and his wife, Taneshia, have two sons, Willie Jr. and Jackson, and one daughter, Morgan. 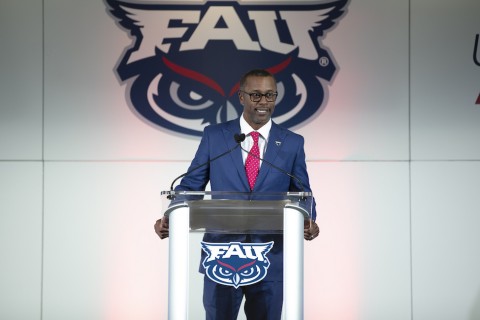