Prohm's more than decade-long experience (2005-15) building the Murray State program - as both an assistant and head coach - coupled with his recent success at Iowa State, have equipped him to lead the Racers as they begin a new era in the Missouri Valley Conference, beginning in the 2022-23 season.

"I have known Coach Prohm since he arrived at Murray State University as an assistant coach," said Murray State President Dr. Bob Jackson. "Not only is he a successful coach, but a person of the highest integrity.  I am extremely happy for MSU, Coach Prohm and his family, and our student-athletes. I look forward to this new era of Racer Basketball."

"As we envisioned the ideal profile for the next Murray State Men's Basketball head coach, it remained abundantly clear a commitment to character, integrity, student-athlete development, community, family and competitive excellence were critically important," said Murray State Director of Athletics, Kevin Saal. "Steve Prohm represents, reflects and personifies these, and many more, qualities. His skill set, experience and genuine love for Murray State will effectively guide our program as we begin our Missouri Valley Conference journey. I could not be more pleased to partner with Steve, Katie, the entire Prohm & Ross families, our staff and Racer Nation in the continued growth and development of Murray State Men's Basketball, and our student-athletes.  Racer Nation, please join us in welcoming the Prohm family back home to Murray State University."

"I'm extremely excited and grateful for the opportunity to return to Racer Nation," said newly tabbed head coach Steve Prohm. "I'm thankful for the belief and continued investments ushered by President Bob Jackson, Director of Athletics Kevin Saal and the great people who support our program.  During my time away, this program has maintained an elite standard of excellence, consistently producing championship-level teams.  Though there have been many great moments and memories all of us have shared, now is the time to shift our focus forward, as we begin a new chapter of Murray State Basketball entering the Missouri Valley Conference.  I'm excited to take this journey with you!"

Seven seasons since he last coached the Racers, Prohm left Murray State in June 2015 to serve as head coach at Iowa State University. He led the Cyclones from 2015-21 and won the Big-12 Conference Tournament twice in 2017 and 2019, taking ISU to three NCAA Tournament appearances with three wins. Prohm coached six players who won seven Big-12 All-Conference honors including Georges Niang and Monte' Morris.

With a career head coaching record of 201-124, Prohm has won 61 percent of his games in 10 seasons with the Racers and Cyclones.

Prohm takes the Racers into the Missouri Valley Conference and immediately becomes one of the most experienced coaches in the league when Murray State officially becomes a member on July 1.  His 133 games coached at Murray State is fifth in the MVC and his 325 career games is sixth.

Among a select group of former Murray State coaches, who understand the history and tradition of the program, Prohm helped build the Racers as an assistant to Coach Billy Kennedy (2005-11) and as head coach (2011-15).  Prohm's commitment to excellence established him as the program's all-time leader in winning percentage (.781) and the quickest to 100 career wins.

Prohm's run of 104-29 in four seasons included the Racers winning two Ohio Valley Conference regular season titles in 2012 and 2015 and a game in the 2012 NCAA Tournament. His 2011-12 team established the Racers as the final undefeated team in the nation at 23-0 with a top-10 national ranking. His 2014-15 team went undefeated in the OVC play, won a conference record 25 consecutive games, and advanced to the quarterfinals of the NIT.   Prohm was voted twice OVC Coach of the Year and was named Basketball Times National Coach of the Year in 2012.  NBA draft selections, Isaiah Canaan and Cameron Payne combined to win three OVC Player of the Year awards between 2012-15 and each earned All-America honors. During his 10 seasons at Murray State, Prohm coached nine players who combined to win 17 All-OVC awards.

Prohm hired Matt McMahon as an assistant coach in 2011 before handing him the reins in 2015, after Prohm took over the Iowa State program. Earlier this week, McMahon was named Head Coach of the LSU Tigers, after seven successful seasons in Murray. 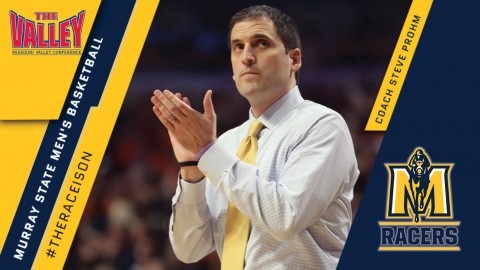