Steve Angle Recommended To Be Chancellor Of UT Chattanooga

Steve Angle, senior vice president at Wright State University, will be recommended by UT System President Joe DiPietro for election by the UT Board of Trustees as the next chancellor of the University of Tennessee at Chattanooga.

The Executive and Compensation Committee of the UT Board of Trustees will vote on DiPietro's recommendation at its meeting on Thursday, and the full board will vote at its meeting on Friday. Both meetings will be held at UTC. A press conference announcing the new chancellor is scheduled to begin at approximately 3:15 p.m. in the Chattanooga Room of the University Center at UTC following adjournment of the board meeting.

"Steve is an accomplished scholar and administrator and a proven team builder with an understanding of a metropolitan institution like UTC. I believe his experience in partnering with local industry, fundraising and listening to all constituents will resonate with the Chattanooga community," DiPietro said.

"Finding the best leader for UTC who appreciates its distinctive characteristics and value has been my focus over the last several months. It is very gratifying that so many capable and distinguished candidates came forward, and I appreciate their interest," he said.

Pending the vote of the board, Angle's effective start date will be July 1. The new chancellor will replace Roger Brown, who retired Sept. 30, 2012. Grady Bogue, a retired professor of leadership and policy studies at the University of Tennessee, Knoxville, has served as interim chancellor. With the help of Parker Executive Search, the 21-member committee began its search in late August. The committee selected five candidates to bring to campus for open forums in January. Then the field was narrowed to three finalists.

Angle was provost at Wright State University from 2007 to August 2012. Since that time, he has served as senior vice president. He also is a professor of chemistry. At Wright State, Angle led the establishment of new online degree programs and worked with the Ohio Board of Regents to develop the "Complete College Ohio" plan to increase completion rates in the state, similar to the Complete College Tennessee Act, which changed the funding formula for public higher education institutions in Tennessee to reward metrics such as retention and graduation.

Before his tenure at Wright State, Angle was dean of the College of Natural and Agricultural Sciences and director of the Agricultural and Natural Resources Program at the University of California, Riverside. During his tenure as dean, grant awards increased from $18 million to $65 million, and he initiated programs to improve student success and undergraduate research programs.

Steve and his wife, Dominique Belanger, are the parents of a son, Ian, and a daughter, Zoë.

To learn more about the search and read more about Angle and download a photo, visit www.tennessee.edu/chancellorsearch/utc. 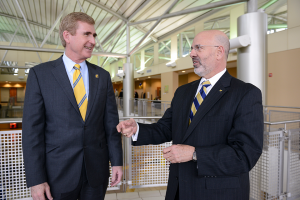