NORFOLK, Va., – Today, after a comprehensive and competitive national search by Parker Executive Search Firm, the MEAC Council of Presidents and Chancellors announced Sonja Stills as the next MEAC Commissioner effective January 1, 2022.

With Stills’ selection, she becomes the first female commissioner in MEAC and HBCU Division I history.

“On behalf of MEAC institutions’ presidents and chancellors, I am thrilled to welcome Ms. Stills as our next commissioner,” said Johnson O. Akinleye, Ph.D., chancellor of North Carolina Central University and chair of the MEAC Presidents and Chancellors Council. “Her extensive portfolio, experience and service with the MEAC make her uniquely prepared to elevate the conference in the coming years. As a proven leader who is making history for the MEAC, she is equally passionate about providing opportunities for our diverse student-athletes and building a portfolio of athletic and academic successes.”

“When we started the search process, my colleagues and I were clear-eyed,” Dr. Tony Allen, president of Delaware State University and chair of the MEAC Presidents and Chancellors Search Committee, said. We needed bold leadership for a new day in Division I sports and a Mid-Eastern Athletic Conference that needed to take its rightful place in the NCAA. In Commissioner-Elect Stills, we hit the mark squarely – determined, durable, and able to lead a paradigmatic shift in our conference and across the collegiate athletic landscape. ‘Why Not Us…’”

“I’m honored to be named the Mid-Eastern Athletic Conference’s next Commissioner,” Sonja Stills said. “I’ve learned a great deal in my tenure with the conference and look forward to continuing the MEAC’s history of excellence. Thank you to the MEAC Council of Presidents and Chancellors for this opportunity and thank you to Commissioner Dr. Dennis E. Thomas for your leadership and mentorship over the past 19 years.”

Stills currently serves as the Chief of Staff and Chief Operating Officer of the MEAC. With over 19 years of experience in assisting with articulating and developing a clear, strategic vision for the future of the conference, she brings an unmatched level of expertise to her new role as MEAC Commissioner. A 2021 MEAC 50th Anniversary Pioneers in Women’s Sports Award recipient, Stills embodies all that is the MEAC.

“Congratulations to Sonja Stills,” Dr. Dennis E. Thomas said. “I’m thrilled to see her hard work, determination, discipline and integrity being rewarded.  Sonja has always demonstrated vision and a passion for student-athlete achievement, which is why I’m confident she will lead the MEAC to its next level of success.”

In addition to her roles as Chief of Staff and Chief Operating Officer, Stills also serves as the MEAC’s Director of Esports, a new, cutting-edge initiative that began in the summer of 2020. She took charge in this new position, serving as the key driver in developing regulations for the MEAC Esports Community and developing the MEAC’s esports strategy. Her goal is to enhance awareness of the MEAC’s esports initiative by working with industry business leaders to encourage growth.

Since arriving at the MEAC, Stills has elevated overall brand visibility for the conference. She has negotiated corporate partnership by working with major companies including iHeartRadio, US Marines, Home Depot, Hampton Roads Transit, Priority Automotive, ESI, TowneBank, and Harley Davidson. She assisted in negotiating a contract with Nike with member institutions. She also managed the conference budgets. Additionally, she was instrumental in developing the MEAC Strategic and Long-Range Plan in December 2008 and 2021-22, along with securing global creative agency 160over90 as the marketing company for the MEAC in 2020.

Before arriving at the MEAC, Stills served as Hampton University’s Coordinator of Athletic Academic Support for four years, and for three of those years, she was appointed Senior Woman Administrator. While at Hampton, she created the university’s first Athletic Academic Support Program and implemented the CHAMPS/LifeSkills Program. She provided academic advising and counseling to student-athletes.

A 1993 graduate of Old Dominion University, Stills earned her bachelor’s degree in Human Services Counseling. In 1996, she received a Master of Arts in Counseling (College Student Work Personnel) from Hampton University. She would later go on to graduate from the Sports Management Institute in 2002 and the NACWAA/HERS Institute for Administrative Advancement in 2008. 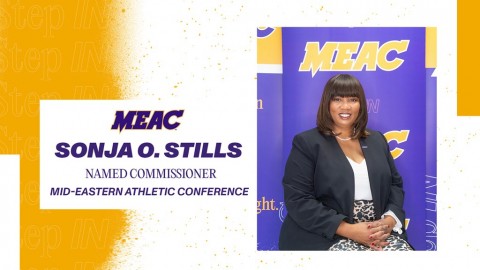