"Recently retired athletics director Clint Bryant left a long legacy of success at Augusta University, so we knew we had some big shoes to fill. We have the utmost confidence in Ryan Erlacher, who brings a tremendous amount of experience from Clayton State University and other institutions," said Keel. "I'm excited to welcome Ryan to Jaguar Nation and can't wait to see him help grow the future of athletics here. I know he will lead our student athletes and coaches to many wins, both athletically and academically."

"My family and I are beyond excited to be joining Augusta University and the local community," said Erlacher. "I'd like to thank President Keel, Dr. Russell Keen and the entire search committee for their vote of confidence in me to lead Augusta athletics into the future. Clint Bryant was a great leader in our field, and I look forward to continuing the tradition of excellence he started.

"We are going to set a bold and exciting vision for the future of Augusta University athletics, one where I truly believe the sky's the limit. We will work tirelessly to set a higher standard of excellence in everything that we do and produce programs that represent our institution exceedingly well, on and off the field of play."

As an executive and administrator in intercollegiate athletics, Erlacher brings over 15 years of experience to Augusta University. As chief athletics administrator at Clayton State, he oversees 11 sports and manages more than 30 staff members. Under his leadership, academic success within Clayton State Athletics is at an all-time high, with the department achieving above a 3.0 GPA for the past eight semesters. For the past three years, Clayton State has earned the Peach Belt Conference President's Academic Award. In 2022, the department was a finalist for the NCAA Division II Award of Excellence.

Erlacher began his career as a student assistant for the Flagler College men's basketball team under legendary coach Bo Clark. During that time, the Saints went 91-27 and qualified for the NAIA National Tournament for the first time in program history, reaching No. 2 in the national rankings.

Erlacher will spend the next several weeks transitioning his duties at Clayton State. Until his arrival at Augusta University, interim Director of Athletics Melissa Brocato will continue to serve in that capacity.

As one of Georgia's four public research institutions, Augusta University offers customizable, accessible education on campuses in Augusta and across the state. Augusta University aims not only to be different, but also to make a difference — to reimagine and recreate the future of art, technology, education and health care. Home to Georgia's only public academic medical center and designated by the state as a health sciences center of excellence, Augusta University is dedicated to creating a safer, healthier and more equitable Georgia. 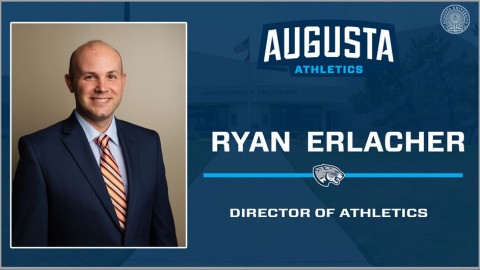