According to Interim Provost Dr. Mary Tanner, Rutledge was chosen after a national search assisted by Parker Executive Search. A campus-based committee was led by Dr. Jerald Ainsworth, Dean of the UTC Graduate School.

Prior to joining the UTC faculty in 1995, Rutledge taught English and Latin in Hamilton County Schools. In 1999, she was appointed to a nine-year term on the Tennessee State Board of Education. 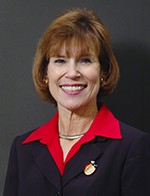