NYU Senior Vice President for Student Affairs Marc Wais today announced that Stuart Robinson has been named Assistant Vice President and director of athletics at NYU, effective August 3, 2020. Robinson comes to NYU from SUNY New Paltz, where he served as director of athletics, wellness, and recreation; head coach of the men’s soccer team for 15 years; and adjunct professor of English.

“Even among an impressive international field of applicants, Stuart Robinson distinguished himself, so we’re particularly excited to have him join our NYU team,” said Wais. “His clear vision of the scholar/athlete paradigm, his holistic view of the role athletics and recreation play in student wellness and success, his record of achievement in a variety of educational settings and roles, his background as a New Yorker, his commitment to diversity and inclusion in education, and his ability to connect with people made him a stand-out candidate and the unquestioned first choice of the search committee.”

Robinson has had extensive experience in expanding and innovating sports programming. Under his leadership, New Paltz revamped its athletic facilities and increased its competitive presence in Division III athletics, with its teams claiming multiple conference championships and the school’s athletes and coaches receiving several conference and national awards. His tenure was also notable for the introduction of creative support programs for students both within and outside the athletics program. Robinson first joined New Paltz in 1994 as assistant athletics director. After serving as assistant to the president in 1995, he went on to positions of increasing responsibility before being named athletics director in 2001.

“Stuart has left a tremendous legacy of success through winning seasons and numerous championships for our athletics teams; growth in our athletic, recreation, and wellness programs; and the impressive accomplishments of our student athletes,” said Donald Christian, president of SUNY New Paltz. “I admire and respect the high standards and expectations for both athletic and academic achievement he has established for players and coaches. Stuart has been an engaged leader on campus, in the community, and among his peers in the SUNY Athletic Conference (SUNYAC) and NCAA.”

A graduate of the Hotchkiss School and Williams College, Robinson worked as an assistant director of admissions at Vassar, where he also served as a house associate, an advisor to minority students, and head coach of the men’s soccer team. He earned a master’s degree in English from Middlebury College and was an instructor in English at Dutchess Community College for four years before joining SUNY New Paltz. He has participated extensively in university-wide strategic efforts, where he has emphasized collaboration and a focus on the student experience. He has also served in leadership capacities in both the NCAA and the SUNYAC.

Robinson will replace Christopher Bledsoe, who recently retired as director of athletics after 23 years of service.

“Chris leaves a tremendous legacy, including three NYU varsity teams winning NCAA national championships and three other teams as national runners-up, while ensuring our student-athletes maintained standards of excellence in the classroom,” said Wais. “Chris also played a central role in the planning and design of athletic facilities and programs across NYU's global network and sustaining our sports and recreation programs during the construction of the forthcoming facilities at 181 Mercer. We are grateful for his long service and leadership at NYU, and we’re confident that Stuart Robinson will continue the trajectory and lead NYU Athletics into a new and exciting era.” 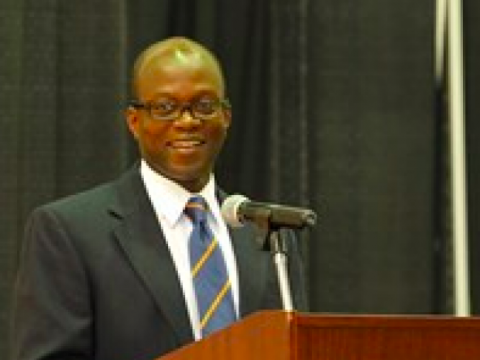