GRAND FORKS — St. Cloud State athletic director Heather Weems will be the next commissioner of the National Collegiate Hockey Conference.

Weems, who started at St. Cloud State since 2012, was the conference's longest-tenured athletic director. She will start with the NCHC on July 6.

"We are thrilled to welcome Heather Weems as the next commissioner of the NCHC," said UND President Andy Armacost, co-chair of the search committee. "Her record of exceptional leadership and her vision for the future of the conference stood out to the members of the Board. Heather will undoubtedly take the NCHC to new heights, building upon its success as the premier conference in college hockey."

The NCHC originally hired Jim Scherr as its first commissioner, but he left before the puck dropped on the league's first game in October 2013.

Fenton, who came from Miami University, had been there ever since, building a reputation as one of the top administrators in the country.

The NCHC became college hockey's dominant league on the ice.

It has won five of the last six NCAA titles and has the best out-of-conference record of any league since its formation.

"The NCHC Board of Directors have made an outstanding hire of Heather Weems as the next commissioner to lead the best college hockey conference," Fenton said. "Her in-depth knowledge of conference operations and college hockey landscape, student-athlete-first mentality, and vast experiences working on campuses that sponsor the sport make her an ideal selection for the NCHC. Great things are ahead for the NCHC, and I couldn’t be more excited for Heather to be the next commissioner."

The firm reached out to numerous candidates encouraging them to apply. The search committee held a couple rounds of interviews before offering Weems.

Weems will be the second woman to be in charge of a men's college hockey league. Jennifer Heppel, who oversaw the Big Ten's hockey league, was the first.

"As both a participant in and observer to the growth of the NCHC during my time as director of athletics at St. Cloud State University, I am both grateful and excited to transition into this new role as the leader of the conference," Weems said. "The hockey community is tightly connected and I look forward to upholding the strong tradition and innovative spirit that has defined the NCHC and its member institutions.

"As we embark on our 10th year and continue to adjust to a changing NCAA landscape, we will remain a destination for student-athletes to pursue their dreams through competitive quality, a meaningful student-athlete experience, and a commitment to our campuses and communities."

A press conference to formally introduce Weems is scheduled for Monday in St. Paul's Xcel Energy Center, home of the league's postseason championship.

"Heather will be an exceptional leader for the NCHC," said Minnesota Duluth athletic director Josh Berlo, co-chair of the search committee. "She is a talented athletic director, has detailed knowledge of the league and will incorporate her passion for hockey to sustain and advance the NCHC as the model conference in college hockey. I am personally and professionally excited to work with her in this role." 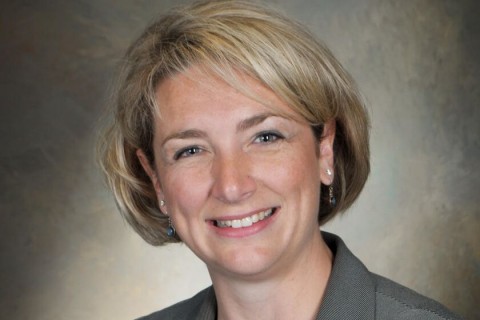