University of Tennessee at Chattanooga Vice Chancellor and Director of Athletics Mark Wharton announced the promotion of Katie Burrows to head coach of the women's basketball program today.  Burrows becomes the sixth head coach in the history of Mocs women's basketball after spending eight seasons as an assistant.

"I am excited to introduce Katie Burrows as the new leader of our women's basketball program," stated Wharton.  "During my short time here, I got to see first-hand how she operates on and off the court, as well as her leadership potential for providing our student-athletes with a first-class collegiate experience."

In her eight years as an assistant coach at Chattanooga, Burrows served on staffs for both Wes Moore and Jim Foster.  During that time, UTC advanced to the postseason eight times, with five trips to the NCAA Tournament following five Southern Conference titles.

"I would like to thank Mark Wharton and the search committee for this opportunity," stated Burrows.  "I have learned so much under both Coach Moore and Coach Foster and I know I am ready to make the jump to head coach.

"I have a passion for my alma mater and the Chattanooga community.  Everyone who knows me will agree that I will do whatever it takes to continue the winning history of this special program."

The Mocs earned a top-25 ranking in both the Associated Press and USA Today Coaches polls in the 2014-15 season, following wins over No. 4 Tennessee and No. 7 Stanford.  UTC climbed as high as 17 in the AP Top 25 and 18 in the Coaches Poll.

Over the last eight years, the Mocs have defeated Tennessee, Alabama and Auburn twice each, Stanford, Villanova, Rutgers, Indiana, Northwestern, Georgetown and Florida.

Jasmine Joyner (2013-17) earned back-to-back SoCon Defensive Player of the Year honors and was named the SoCon Tournament MVP in 2015 and 2017. She finished her career at Chattanooga as the second player to top 1,000 points and 900 rebounds, and is eighth all-time in the NCAA with 436 career blocks.

Alicia "Red" Payne became the first Chattanooga player to earn back-to-back SoCon Defensive Player of the Year honors (2015, 2016) and was named the SoCon Tournament Most Outstanding Player in 2016.

"Based on our long history of success in women's basketball, I felt it was necessary to conduct a national search," added Wharton.  "I was pleased with the quality of individuals who were interested in our program and Katie was a strong candidate from the beginning.

"That being said, she clearly distanced herself from an extremely talented pool of coaches.  She earned the chance to lead our women's basketball program by clearly being the person for the job."

A native of Lookout Valley, Katie came to Chattanooga in 2000 and was an integral member of four straight SoCon titles. In her time as a student-athlete at UTC, the Mocs posted an overall record of 102-23 with wins over such teams as Florida State, Alabama and Louisville. UTC advanced to the NCAA championships all four seasons.

In her senior year, the Mocs posted the nation's longest active winning streak at 27 games that culminated with a first-round win over Rutgers in the NCAA Tournament. In that game, Burrows sank the most memorable shot in Chattanooga history, nailing a 30-foot bank shot from the right side to spark a comeback win over the Scarlet Knights.

Katie earned a spot as among former head coach Wes Moore's Top 10 players in the celebration of "Moore in McKenzie, a Decade of Dominance". She ranks in the top 10 in UTC history in 3-pointers made (107) and attempted (315).

Prior to her return to UTC, Burrows was a coach and teacher at Ringgold High School for three years. She took over a program that had just three wins in the season prior to her arrival.  The Lady Tigers steadily increased their win total in each of her three seasons, culminating in Ringgold's first state playoff appearance since 1986 when the team lost to Rossville in the Class AAA finals.

Prior to that she was the head coach of the girl's basketball team at Tullahoma High School in Tullahoma, Tenn., from 2005-07 and taught health and physical education. Immediately following her graduation from UTC she was the assistant girls basketball coach at GPS from 2004-05 under former UTC player Susan Lance Crownover.

Katie attended Lookout Valley High School where she was named the Chattanooga Times Free Press Best of Preps Female Athlete of the Year.  She was a four-time first team Chattanooga Times Free Press All-City, three-time Region Player of the Year and first team all-state. She was named a Tennessee Class A Miss Basketball finalist in back-to-back seasons.

Katie learned her trade at an early age from her father Joe Galloway who was her high school coach. Joe serves on the Hamilton County School Board and, along with his daughter Kristen Clounch, is still coaching at Lookout Valley. Her brother Keith Galloway is married to former UTC standout Jennifer Wilson and the pair coach the boy's and girl's basketball teams at Hardin Valley Academy in Knoxville.

A 2004 graduate of Chattanooga, Katie earned a B.S. in Exercise Science and Health K-12. She is married to Nick Burrows. They are the parents of daughters, Jordan and Grace. 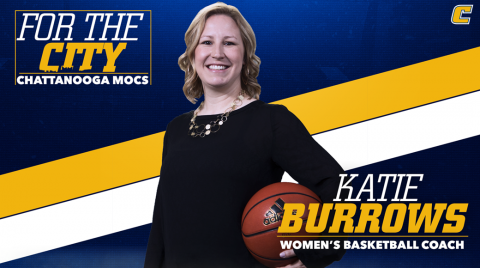