Mike Leach, a two-time national coach of the year, three-time conference coach of the year and the mastermind behind the NCAA record-setting "Air Raid" offense, has been tabbed as Mississippi State's 34th head football coach, Director of Athletics John Cohen announced Thursday.

"Mike Leach is a proven winner who has established a culture of excellence for nearly two decades as a head coach," Cohen said. "An offensive genius and two-time national coach of the year, he has a track record of building programs to national prominence with accountability and a blue-collar approach. We are thrilled to welcome him and his family to the Mississippi State family and look forward to watching our football program grow under his leadership."

"I can't tell you how excited I am to be the head football coach of the Mississippi State Bulldogs," Leach said. "I loved Washington State, but I am excited for the next chapter in the SEC. It's a privilege to be a part of the MSU family, and we look forward to getting down to Starkville shortly."

Leach will be formally introduced at a noon CT Friday press conference at the Leo Seal Jr. Football Complex. It will be open to the public, and it will be carried live on SEC Network, SEC Network+ via the ESPN app, @HailStateFB Twitter and Facebook.

"I want to commend Athletics Director John Cohen and his staff for conducting a very thorough and true national search," MSU President Mark Keenum said. "In Coach Mike Leach, that search produced a charismatic leader who has proven he can both win football games at a high level and motivate teams to play up to their potential. I'm excited about the future of our football program."

The accomplishments for Leach in his 18 years as a head coach are long and distinguished. He has compiled a 139-90 (.607) record, guided his squads to 16 bowl games, produced seven seasons of at least nine victories, captured two division titles, became the winningest coach in Texas Tech history and set school records for bowl appearances at both Texas Tech (10) and Washington State (6). During 10 of those 18 seasons, Leach's passing attack led the FBS – six at Texas Tech and four at Washington State.

Of the 50 most productive passing yardage seasons in FBS history, 11 came from quarterbacks coached by Leach since his hiring as head coach at Texas Tech beginning with the 2000 season. That includes three seasons by Graham Harrell (2006-08), two by Luke Falk (2015-16), one by Gardner Mishew II (2018) and one by Anthony Gordon (2019).

Leach, 58, arrives in Starkville after eight seasons at the helm at Washington State where he compiled a 55-47 (.539) record and was named the 2018 American Football Coaches Association National Coach of the Year and two-time Pac-12 Coach of the Year (2015, 2018). Leach spearheaded WSU to a school-record six bowl appearances and became the first coach in school history to lead the Cougars to five consecutive bowl games. They also led the nation in passing offense in four out of his last six seasons in charge.

In 2019, a young Cougars squad reached the Cheez-It Bowl while leading the nation in passing offense (437.2). A total of eight WSU players earned All-Pac-12 honors.

The 2018 campaign saw Leach produce one of the finest coaching performances as WSU posted its first 11-win season in school history and a share of the Pac-12 North Division. The Cougars were ranked in the top 13 of each College Football Playoff rankings, including four consecutive weeks at No. 8. WSU capped the season with a win over Iowa State in the Alamo Bowl and finished No. 10 in the Associated Press and Coaches polls. Senior quarterback and Mississippi native Minshew captivated the nation, leading the FBS in passing yards per game (367.6).

In the spring of 2019, Leach taught a five-week course at WSU on Insurgent Warfare and Football Strategies, along with former Washington State Senator Michael Baumgartner. That same spring, three Cougars were selected in the 2019 NFL Draft as left tackle Andre Dillard went in the first round to the Eagles, safety Jalen Thompson went in the fifth round to Cardinals and Minshew went in the sixth round to the Jaguars.

In 2017, Leach guided WSU to a 9-4 record, 6-3 in conference play, and a second straight Holiday Bowl appearance. The Cougars opened the season with six consecutive victories and posted wins over No. 5 USC and No. 18 Stanford. Once again, the Cougar offense ranked among the national leaders in passing offense (second) while the defense ranked in the national top 25 in seven categories, including four in the top 10. Senior offensive lineman Cody O'Connell repeated as a first-team All-American while junior Hercules Mata'afa also earned first-team All-America honors.

In 2016, the Cougars posted an 8-5 mark, including a 7-2 record in Pac-12 play, along with an appearance in the Holiday Bowl. Leach guided a WSU offense that led the Pac-12 and finished third nationally in passing (362.5 ypg), and also led the Pac-12 in completion percentage, second nationally, at .703 percent. WSU won eight straight games midway through the season, the most since the 1930 campaign. WSU had 10 players earn All-Pac-12 honors, five were named to the Pac-12 All-Academic teams, and redshirt junior offensive lineman Cody O'Connell was a unanimous All-American and finalist for the Outland Trophy.

The Cougars ended the 2015 season with a 9-4 record, 6-3 in the Pac-12 Conference, capped by a 20-14 Sun Bowl victory over Miami. After starting the season 2-2, the Cougars went 7-2 over the final nine games, posting last-minute victories at Oregon and No. 18 UCLA, and rallying from a fourth-quarter deficit in a 38-24 victory against Arizona State. For the second-straight season WSU led the nation in passing at 389.5 ypg, while also finishing second in the nation in red zone offense, converting 94.5 percent of their opportunities. WSU concluded the regular season by having 11 student-athletes named to All-Pac-12 teams and five to Pac-12 All-Academic teams. Senior offensive lineman Joe Dahl earned Second-Team All-America honors while defensive lineman Hercules Mata'afa garnered First-Team Freshman All-American honors by USA Today.

In 2014, Leach's offense led the nation in passing at 477.7 yards per game, the second-highest total in FBS history, trailing only Houston's 511.3 in 1989. WSU set or tied 42 school, conference or NCAA records during the season, including quarterback Connor Halliday who threw for an NCAA single-game record 734 yards against California. WSU also placed five student-athletes on Pac-12 All-Academic teams and five on All-Pac-12 teams during the season.

In 2013, Leach's second season at the helm of the Cougars, he guided WSU to the Gildan New Mexico Bowl, the first bowl game for the Cougars in a decade. The Cougar offense threw for more than 400 yards five times, including a 2013 NCAA FBS–best 557 yards at Oregon. Quarterback Connor Halliday set WSU single-season records for passing yards (4,587), attempts (714) and completions (449), the first WSU quarterback to surpass the 4,000-yard mark. The Cougars picked up more national recognition as safety Deone Bucannon became WSU's first All-America first-team selection since 2005 and was later selected as the No. 27 overall pick in NFL Draft by the Arizona Cardinals, the first Cougar taken in the first round since 2003. The Cougars also placed eight student-athletes on Pac-12 All-Academic teams during the season.

The architect of the most prolific passing offense in the country, Leach received three national coach of the year awards in 2008 - the Woody Hayes Award, Howie Long/Fieldturf Coach of the Year and George Munger Award. Leach's offense captured six NCAA passing titles and three total offense titles during his 10 seasons in Lubbock.

Leach led Texas Tech to one of the most memorable seasons in school history in 2008 as the team set a program record with 11 regular-season wins en route to an 11-2 record. The win total tied the mark, set previously by the 1953 and 1973 Red Raider squads. Numerous accolades poured in from across the country as an unprecedented four players earned first-team All-America status, in addition to Leach's three coach of the year honors. Harrell, offensive tackle Rylan Reed and offensive guard Brandon Carter each garnered first-team honors, while wide receiver Michael Crabtree was honored as a unanimous All-American for the second-straight season.

Harrell finished his storied career second on the NCAA career passing yardage list with 15,793 yards, while breaking the career NCAA passing touchdowns mark with 134. Harrell threw for 4,555 yards in his debut as the starter in 2006 and became the sixth player and third Red Raider in NCAA history to throw for 5,000 yards in a season with his 5,705-yard effort in 2007 and 5,111 yards in 2008.

The running game also flourished under Leach at Texas Tech. Taurean Henderson broke the NCAA career record for receptions by a running back. The Red Raiders' 28 total rushing scores in 2008 were the most for a Tech team since the 1993 team scored 30. Despite Tech's offense revolving around the pass, Leach did a tremendous job of incorporating the running back position into the mix. Henderson finished his career with 303 receptions, which at the time ranked first in NCAA history among running backs and fourth overall.

A total of 18 players were drafted at Texas Tech under Leach's watch and 21 others signed free agent contracts. In the spring of 2009, four players were selected among the first four rounds of the NFL Draft, marking the most successful draft for Texas Tech in the Leach era.

The program made strides academically as well under Leach. During his 10 years, Texas Tech was recognized as one of the nation's top institutions for consistently being above a 70 percent graduation rate, according to the AFCA.

Prior to coming on board at Texas Tech, Leach, in just one season at Oklahoma, directed a Sooner offense that went from one of the worst in the Big 12 Conference to one of the best in 1999. Leach guided an Oklahoma offense that went from 11th in the Big 12 in 1998 to first in 1999 and 101st in the nation to 11th. In just one year, OU's total offense numbers improved from 293.3 to 427.2 yards per game. Under Leach, the Oklahoma offense set six Big 12 Conference and 17 school records.

Leach and Mumme first teamed up at Iowa Wesleyan College in 1989. From 1989 to 1991 Leach served as offensive coordinator and line coach for an offense that led the NAIA in passing yardage one season and finished second the other two. Iowa Wesleyan quarterbacks passed for more than 11,000 yards in Leach's three seasons and broke 26 national records.

Leach also has made coaching stops in Pori, Finland, where he served as a head coach in the European Football League (1989), as well as one-year stints at College of the Desert (1988) and Cal Poly-San Luis Obispo (1987).

After graduating with honors from BYU in 1983, Leach earned a master's degree from the U.S. Sports Academy and his law degree from Pepperdine University, where he graduated in the top one-third of his class.

The oldest of six siblings, Leach and his wife, Sharon, are the parents of four children; Janeen, Kim, Cody and Kiersten, along with three grandchildren. Born in Susanville, California, Leach was raised in Cody, Wyoming. 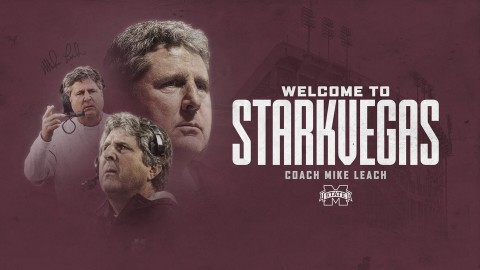