Details regarding Elko's introductory press conference will be forthcoming.

The defensive coordinator and safeties coach at Texas A&M University for the past four seasons, Elko succeeds David Cutcliffe, who held the position for 14 years.

"We are absolutely thrilled to announce Mike Elko as our next head football coach," King said. "He has an innovative football mind and a natural ability to connect with both players and coaches around him. Mike has a proven track record of success and is deeply committed to the overall student-athlete experience. From our first conversations, I knew Mike, Michelle and their children would make phenomenal additions to the Duke family!"

In Elko's 23 years of coaching, 18 have been spent as a defensive coordinator, including eight at the FBS Power 5 level. He has twice been named a semifinalist for the Frank Broyles Award (2017 and 2021), which is given annually to the top assistant coach in college football.

"I am delighted to welcome Mike Elko to Duke as our next head football coach," Duke President Vincent E. Price said. "We look forward to his leadership and vision on the field and his commitment to the highest standards of academic success. We could not be more excited to have Mike on our team as a teacher and mentor for our student athletes."

"I want to thank Nina King and President Price for this great opportunity," Elko said. "Duke stands for excellence. The university has excelled in everything they've ever tried to do, whether that'd be in academics or athletics. I'm excited to get to work."

During his time in College Station under head coach Jimbo Fisher, Elko helped lead the Aggies to a 34-14 (.708) record and four consecutive bowl games.

Prior to his time with the Aggies, Elko spent one season at the University of Notre Dame with head coach Brian Kelly where he helped the defense rank in the top half nationally in four major defensive categories. The Irish were 10-3 during his lone season in South Bend, including a 21-17 win over LSU in the 2017 Citrus Bowl. Notre Dame's unit showed marked improvement in total defense under Elko with an average of 369.2 yards allowed per game. Additionally, the Irish improved at least 20 spots in the national rankings in rushing defense (72nd to 51st), pass efficiency defense (79th to 46th), scoring defense (62nd to 31st), third down defense (60th to 37th), turnovers gained (104th to 50th), sacks (117th to 82nd) and tackles for loss (102nd to 58th).

Elko served three seasons (2014-16) at Wake Forest University as the defensive coordinator and safeties coach for head coach Dave Clawson. His 2016 unit ranked in the top-20 nationally in fumbles recovered (3rd), turnovers forced (10th), sacks (12th), defensive TDs (17th), red zone defense (17th) and scoring defense (20th). That year, the Demon Deacons were one of the four schools in the FBS to rank in the top-20 in turnovers forced, sacks and scoring defense. The three other programs qualified for the College Football Playoff that season (Alabama, Clemson and Washington).

During his stint in Winston-Salem, he mentored All-ACC and ACC Defensive Rookie of the Year runner-up Jessie Bates III, who finished with 93 tackles and five interceptions in his career, including two that were returned for a touchdown in 2016.

Elko was also on Clawson's staff for five seasons (2009-13) as Bowling Green's defensive coordinator and linebackers (three seasons) and safeties (two seasons) coach. He helped the Falcons to three bowl game appearances and saw his unit finish first in the Mid-American Conference (MAC) in scoring defense, total defense, rushing defense and pass defense efficiency in each of his last two years. Over his five seasons as defensive coordinator, the Falcons forced 106 turnovers (1.7 per game) and held opponents to just a 35.9 percent conversion rate on third downs. In both 2012 and 2013, Bowling Green ranked in the top 10 in the nation in both total defense and scoring defense.

Under Elko's guidance, Bowling Green had seven different players earn 14 All-MAC honors, including three-time recipients Chris Jones and Dwayne Woods. Jones would go on to be named a 2012 First Team All-American by the Football Writers Association of America (FWAA).

Elko's coaching experience also includes one-year stints at the U.S. Merchant Marine Academy (2001), where he served as defensive coordinator, and at his alma mater, the University of Pennsylvania (2000), directing the secondary. The Quakers won the 2000 Ivy League title during his lone season on staff. He began his coaching career at Stony Brook in 1999 where he guided the linebackers in the fall and the defensive backs in the spring.

A native of South Brunswick, N.J., Elko graduated from Penn with a bachelor's degree in history in 1999. As a safety, he helped the Quakers to the 1998 Ivy League crown.

Elko is married to the former Michelle Madison of Franklinville, N.J., and they are the parents of three children Michael, Andrew and Kaitlyn.

New customers interested in 2022 season tickets can guarantee your seat with a $50 deposit per ticket by clicking HERE or calling 919-681-BLUE (2583). Current season tickets holders will be contacted by the Duke Athletics Ticket Office after the new year with renewal options.

# will not coach in bowl game
^ indicates defensive coordinator 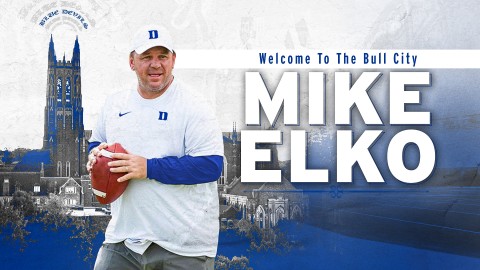