Duffy, who becomes the program's sixth head coach and has signed a six-year contract with the University, will officially be introduced to the campus and Milwaukee community at 3:15 p.m. CT on Wednesday, April 10 in the Alumni Memorial Union (Room 157).

"Megan is a tremendous fit with the Marquette family and the University's values," Scholl said.  "I have watched her career ascend for several years and have seen her achieve tremendous success at the highest levels as a player and coach.  She coaches for the right reasons, utilizing basketball to help develop the women in her program and position them for success, both on and off the court.  I am looking forward to working with her as we continue the great momentum we have established in women's basketball."

The Dayton, Ohio, native has translated her extensive playing career, which included All-America selections (finalist for national player of the year awards), USA Basketball participation (Gold medalist) and professional experience in the WNBA (Minnesota and New York) and overseas, into immediate success in the coaching ranks.

Duffy arrives at Marquette after leading Miami (Ohio) to a pair of Women's National Invitation Tournament appearances during her two-year tenure with the program.  Miami finished the season with a 23-9 overall record and a 13-5 Mid-American Conference mark in 2018-19 and reached 20 wins in back-to-back seasons for the first time since the 1980's.

She was one of just four rookie head coaches in 2017-18 to collect at least 20 wins and the only female to accomplish the feat.  The RedHawks finished 21-11 that season, the largest improvement in the nation from the previous season in terms of total victories (nine more than 2016-17, 12-21).  Duffy guided the program to a 44-20 (.687) record during her two years, making her the winningest active coach in the MAC.

Prior to her time in Oxford, Duffy owns stops at St. John's (2009-12, assistant coach), George Washington (2012-14, associate head coach) and Michigan (2014-17, assistant coach).  She helped lead each of the three programs to the postseason (seven total appearances), highlighted by a trip to the Sweet 16 with the Red Storm in 2012 and the WNIT title with the Wolverines in 2017.

Duffy was a four-year letterwinner at Notre Dame (2002-06), helping the Irish to four-straight NCAA appearances and two Sweet 16 berths. She is one of four players in school history to total at least 1,000 points, 500 assists and 200 steals. She was an Associated Press and Kodak All-America honorable mention in 2005 and 2006, while being a finalist for both the John Wooden Award and Nancy Lieberman Award in her final season.

In 2006, she won the Frances Pomeroy Naismith Award, which is given to the nation's top point guard under 5-8. Duffy was also a two-time All-BIG EAST first team selection (2005-06), the 2006 BIG EAST/Aeropostle Scholar Athlete of the Year and a 2006 CoSIDA/ESPN the Magazine Academic All-American (first team).

She also helped Team USA to the gold medal at the 2005 World University Games. After her career at Notre Dame, she was the 31st pick in the 2006 WNBA draft and played three seasons with the Minnesota Lynx and New York Liberty. Duffy also played overseas with teams in Romania, Slovakia, Italy and Wales.

Duffy graduated from Notre Dame in 2006 with a double degree in psychology and computer applications. 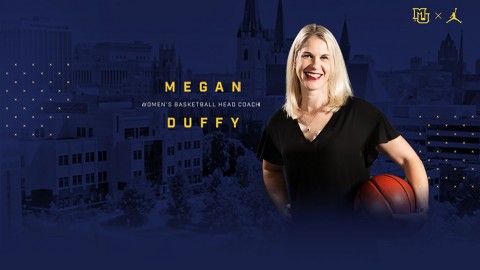