No stranger to the state of Illinois and the Chicagoland area, Luke Yaklich (YOCK-litch) has been named head men's basketball coach for the UIC Flames, subject to approval by the University of Illinois Board of Trustees.

"Luke has been an integral part of championship programs at every stop in his career," said UIC Director of Athletics Michael Lipitz. "He's a skilled tactician and teacher of the game, is highly regarded for his ability to develop players to their full potential, and prioritizes the academic success of his students. We welcome Luke, his wife Amy, and their three children, Olivia, Griffin and Taylor, to the Flames Family."

"I am honored to lead the University of Illinois at Chicago Flames men's basketball program," said Yaklich. "This is an incredibly exciting opportunity for my family to return to Illinois and represent an outstanding institution that I have long admired.

"I want to thank Chancellor [Michael] Amiridis and Director of Athletics Michael Lipitz, as well as their administrative team, for their professionalism and communication throughout the search process," added Yaklich.

"I cannot wait to begin building relationships with our players and their families, help our team improve on the court and build our culture," said Yaklich. "I also look forward to recruiting future classes to UIC. I'm equally excited to connect with our more than 285,000 alumni in Chicagoland, throughout the state of Illinois and across the country.

"UIC is a prestigious academic institution in one of the world's greatest cities. Combined with our dedicated coaching and support staff, beautiful campus, exciting style of play and strong team culture, we will attract the very best student-athletes and position the Flames to win Horizon League Championships," said Yaklich.

Most recently the Associate Head Coach for Shaka Smart at the University of Texas, Yaklich helped the Longhorns to a third place Big XII finish and presumptive NCAA Tournament berth in 2019-20 (prior to this year's tournament being cancelled). Considered one of the top defensive minds in the game, Yaklich shaped a defense that ranked in the top 30 in the NCAA in scoring defense by allowing only 63.3 points per game.

Prior to his season in Austin, Yaklich served as an assistant coach for John Beilein at the University of Michigan. He helped lead the Wolverines to a pair of 30-win seasons, two Sweet 16 appearances, and the 2018 National Championship Game.

Michigan won over 80 percent of its games for a total of 63 victories in Yaklich's two campaigns. The Wolverines ranked eighth nationally in scoring defense (63.3 ppg) in his first season on the bench (2017-18) and advanced all the way to the NCAA Championship game against Villanova. It was the first time a Michigan team led the Big Ten in scoring defense since 1963-64. It also ranked third nationally that year in Defensive Efficiency by the KenPom ratings (90.5).

During Yaklich's second season in Ann Arbor, Michigan led the Big Ten once again and ranked second in the NCAA in scoring defense (57.7 ppg) and second in KenPom's Defensive Efficiency (86.2). The team posted 30 wins, earned a No. 2 seed in the NCAA Tournament and advanced to the Sweet 16 before bowing out against Texas Tech, the eventual national runner-up.

Yaklich began his collegiate coaching career at his alma mater, Illinois State, on the staff of head coach Dan Muller. From 2013-17, he helped the Redbirds win 86 games and earn three postseason bids (2 NIT; 1 CBI). Yaklich was elevated to Associate Head Coach prior to the 2016-17 campaign, and that year ISU posted a 28-7 overall mark, including a 17-1 record in the Missouri Valley Conference. The Redbirds set single-season program records for overall wins (28), regular-season victories (25) and conference wins (17). ISU concluded that season ranked fifth in the NCAA in field-goal percentage defense (37.9 percent) and seventh in scoring defense (61.3 ppg).

A teacher in the truest sense, Yaklich ascended to the collegiate ranks after serving as head coach of highly successful Illinois high school programs for 14 years, where he primarily taught U.S. history.  He was head boys' basketball coach at Joliet West High School (Joliet, Ill.) for six seasons, while also leading the Joliet Pride and Illinois Wolves AAU teams.

During his final season at Joliet West (2012-13), Yaklich led the Tigers to 19 wins and an IHSA Class 4A Lockport Regional title. He also guided the 2009-10 team to a 24-8 record and the Homewood-Flossmoor Sectional championship. He earned 2010 District 9 Illinois Basketball Coaches Association (IBCA) Coach of the Year honors.

"As a former Illinois high school coach, I am excited to be back teaching and coaching in the state and the city of Chicago," said Yaklich. "It doesn't seem like that long ago I was driving my son to practices at Washington Park or playing a game at Saint Columbanas before heading to another game in the suburbs. I am really looking forward to continuing to build upon the relationships I have with all the coaches in the state and region at the high school, AAU and junior college levels."

A native of LaSalle, Ill., Yaklich is a 1994 graduate of La Salle-Peru Township High School, where he played basketball for the Cavaliers. He graduated from Illinois State University in 1998, where he earned a Bachelor of Science degree with endorsements for American and world history, sociology, political science and geography.

The UIC head coach also earned two master's degrees from Olivet Nazarene University in Bourbonnais, Ill. He received his Master of Education in 2004 and followed in 2009 with a Master of Education Administration. He also became a National Board Certified Teacher (NBCT) for social studies in 2012.

Yaklich and his wife Amy, have three children, Olivia, Griffin and Taylor. 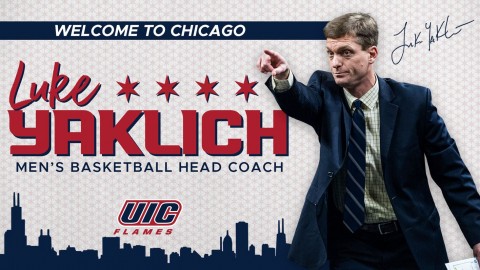