Following a nationwide search, Georgia State has named Tennessee Associate Head Coach Rob Lanier as the Panthers next men’s basketball head coach. The announcement was made by President Mark Becker and Director of Athletics Charlie Cobb on Friday.

Lanier (pronounced: luh-NEER) has spent the last four seasons as associate head coach at Tennessee. The Volunteers finished the 2018-19 season 31-6, advancing to the Sweet 16 of the NCAA Tournament.  The season included a win over the No. 1 team in the nation and a No. 1 national ranking for the Volunteers.

In addition to boasting four years of Division I head coaching experience at Siena, the 50-year-old Lanier also has coached in the Big 12, SEC, ACC, Big East, Atlantic 10 and MAAC. He has worked on the bench for 11 teams that advanced to NCAA Tournament play.

“In Rob Lanier, we’ve hired a basketball coach who I believe will take Georgia State basketball to the next level,” President Mark Becker said. “He has vast experience coaching in some of the nation’s premier college basketball programs, and he has a deep commitment to developing players as students and athletes. Coach Lanier’s demonstrated record of recruiting top talent, including numerous all-Americans, also bodes well for the future of Panther basketball. I welcome him to Atlanta and the Georgia State family.”

“We are extremely pleased to welcome Rob and his family to the Panther Family,” Director of AthleticsCharlie Cobb said. “We believe that under his leadership, our program will continue to rise as one of the premier programs in the country. He understands the core values we have at Georgia State and will help our student-athletes succeed both on the court and in the classroom.”

“I would like to thank Georgia State President Mark Becker along with Director of Athletics Charlie Cobbfor this incredible opportunity,” Lanier said. “This is a time of great transformation at Georgia State and I look forward to continuing to build on the reputation that our men’s basketball program has established nationally. I am excited to begin building relationships with the young men in this program.”

Immediately prior to his hiring at Tennessee in April 2015, Lanier served four seasons for Rick Barnes as the associate head coach at Texas from 2011-15. It was Lanier’s second stint on Barnes’ staff in Austin.

Known for his prowess on the recruiting trail, Lanier played a key role in the assembly and development of Tennessee’s 2016-17 recruiting class, which was responsible for 44 percent of the team’s scoring that season and finished the year as the highest-scoring crop of freshmen in program history (1,040 points). One member of that class, forward Grant Williams, went on to earn SEC Player of the Year honors as a true sophomore in 2018.

Texas’ three-man recruiting class in 2014 featured McDonald’s All-American Myles Turner (No. 2 recruit by ESPN), No. 86-ranked prospect Jordan Barnett and transfer Shaquille Cleare, who was rated the No. 30 prospect nationally in 2012 by ESPN.

In total, Lanier has played a role in signing nine McDonald’s All-Americans and 11 players that he either signed or coached have gone on to become NBA Draft Picks.

Before returning to Texas, Lanier served as assistant coach under Billy Donovan at Florida for four seasons. In those four years, Lanier helped the Gators advance to postseason play every year while posting a 99-44 (.692) cumulative record.

Lanier’s tenure at Florida was preceded by a two-year stint as an assistant coach on Dave Leitao’s coaching staff at Virginia. During his second year in Charlottesville (2006-07), the Cavaliers posted a 21-11 record and advanced to the second round of the NCAA Tournament. Despite being picked to finish eighth in the conference, Virginia registered an 11-5 mark in league play and claimed a share of the ACC regular-season championship with North Carolina. It marked the first league title for the Cavaliers since 1994-95.

Lanier spent four years as the head coach at Siena from 2001-05. During that span, the Saints advanced to one NCAA Tournament and one NIT.

Siena won the Metro Atlantic Athletic Conference Tournament Championship in 2002 and then defeated Alcorn State in an NCAA Tournament opening-round game before losing to eventual national champion Maryland in the first round. During the 2002-03 campaign, Lanier guided Siena to a 21-11 record a third-place MAAC finish with a 12-6 league mark advancing to the NIT.

Prior to becoming the head coach at Siena, Lanier worked alongside Barnes as an assistant coach at Texas for two seasons from 1999-2001. During that first stint in Austin, the Longhorns recorded a two-year mark of 49-18 (.731) and advanced to a pair of NCAA Tournaments. Texas posted a 24-9 record in 1999-2000, finished second in the Big 12 with a 13-3 league mark and advanced to the second Round of the NCAA Tournament.

Prior to Lanier’s departure to take over the program at Siena, he played a major role in the recruitment of T.J. Ford, who went on to earn National Player of the Year honors with the Longhorns in 2002-03.

Lanier served as an assistant coach at Rutgers University for two seasons from 1997-99. While at Rutgers, he was instrumental in helping the Scarlet Knights secure back-to-back nationally-ranked recruiting classes. Included in Lanier’s first class was guard Dahntay Jones, who went on to earn 1999 Big East All-Rookie Team honors. Jones NBA career spanned more than 14 seasons, including a championship with the Cleveland Cavaliers in 2016.

Lanier’s first full-time collegiate coaching experience came at his alma mater, St. Bonaventure, from 1992-97. Prior to that, he broke into the college coaching ranks as a graduate assistant and then a restricted-earnings assistant coach at Niagara from 1990-92.

Lanier received his first head coaching experience in the summer of 1995 when he led a group of American collegians on a tour of the Netherlands. He also coached summer All-Star teams in Italy (1996), Germany (1998) and Greece (1999 and 2000).

A native of Buffalo, N.Y., Lanier graduated from St. Bonaventure in 1990 with a bachelor’s degree in psychology. A four-year letterman with the Bonnies who scored 868 career points, he was a three-year starter and team captain during his senior season. Lanier earned Atlantic 10 Conference All-Freshman Team honors in 1986-87 and was named the team’s Most Improved Player in 1988-89. A two-time scholar-athlete nominee, he went on to earn a master’s degree in educational counseling from Niagara in 1993. 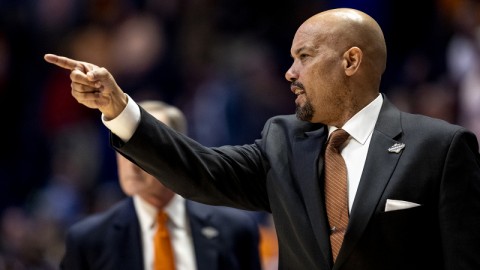