The Georgia Military College Board of Trustees has selected Lieutenant General William B. Caldwell, IV to be GMC's 21st president. General Caldwell will officially assume duties as president this summer, upon his retirement from the United States Army following 37 years of service. He will succeed the retiring President of Georgia Military College, Major General Peter J. Boylan, USA (Ret.), who is the longest serving president in the history of the College, having served since 1992.

"I'm honored to have been selected for this prestigious position, and to carry on a proud 134-year tradition of excellence here at Georgia Military College...a tradition President Peter Boylan helped build over the last 21 years," said Caldwell. "After nearly 37 years of leading America's incredible men and women in uniform, I understand how important it is to produce leaders with a strong, 21st-Century education."

General Caldwell graduated from the United States Military Academy at West Point in 1976. He earned a master's degree from the U.S. Naval Postgraduate School and from the School for Advanced Military Studies at the U.S. Army Command and General Staff College. General Caldwell attended the John F. Kennedy School of Government at Harvard University as a Senior Service College Fellow and also served as a White House Fellow, one of America's most prestigious programs for leadership and public service.

General Caldwell is married to Stephanie, who is a Methodist Minister, and he has five children.

"My family and I are excited to be returning to Georgia, and we look forward to working with the faculty and students, as we grow the next generation of America's leaders." Caldwell said.

The naming of Georgia Military College's 21st president came after a six-month national search that attracted more than 35 highly qualified candidates. The selection process was steered by the Georgia Military College Board of Trustees and a search committee comprised of representatives from the college and preparatory school staff and faculty, GMC Foundation, and members of the Milledgeville/Baldwin County community.

"The level of nation-wide interest in this opportunity and the quality of the applicants is a testimony to the reputation of the college and the transformational leadership of General Boylan," said Mr. Randall A. New ( HS'71, JC'73), search committee chairman, and Chairman of the GMC Board of Trustees. 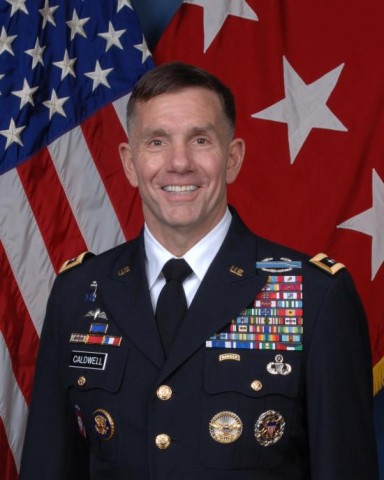