The Board of Regents of the University System of Georgia (USG) today announced Dr. M. Brian Blake as finalist for the Georgia State University presidency. Blake is currently executive vice president for Academic Affairs and provost of George Washington University (GWU) in Washington, D.C.

“Dr. M. Brian Blake’s experience as a leader in higher education makes him an outstanding candidate to lead one of the nation’s top universities for innovation in student success while also making sure graduates have the skills they need to work – and make an impact – around Georgia and anywhere in the world,” USG Chancellor Steve Wrigley said. “Georgia State University has set a national standard for helping students of all backgrounds attain their degrees while achieving records through strong financial management and faculty research. Its next president should build on those successes while understanding why families seek better opportunities through higher education. Dr. Blake, as a first-generation college graduate with a passion for software and computing, is just that person. He also happens to be Georgia-born and USG-educated, and I am pleased he’s been selected as the finalist for president of Georgia State.”

In his current role, Blake is the highest-ranking academic officer at GWU where he oversees 10 schools and colleges, three campuses and the academic success of 28,000 students. He also spearheaded GWU’s university-wide, post-pandemic plan to assess new innovations in teaching and course modalities. He is a professor of computer science and electrical and computer engineering within GWU’s School of Engineering and Applied Sciences.

“Dr. Blake has the skills to lead USG’s largest institution while setting high expectations and supporting the needs and growth of students, faculty, staff and alumni,” Board of Regents Chairman Sachin Shailendra said. “He is an innovator who has held key positions at some of the nation’s top institutions. He has strong ties to Georgia and I am looking forward to watching him help Georgia State achieve even greater milestones.”

Prior to joining GWU in 2019, Blake served as executive vice president for academics and Nina Henderson provost at Drexel University in Philadelphia, Pa., where he led the implementation of a new, responsibility-centered budget model and the president’s strategic plan. He also developed the academic vision, “Creating the 21st Century Academic Experience.” During his four-year tenure, Blake helped Drexel recruit its most academically gifted class, achieve the highest retention rate in the university’s history and increase research activity to Drexel’s highest levels of all time.

Blake also served as vice provost for Academic Affairs and dean of the Graduate School at the University of Miami in Miami, Fla., where he had oversight of 155 programs housed in 12 schools and colleges. He received a resolution of tribute from the university’s Board of Trustees for elevating the visibility of graduate education and significantly enhancing the environment for faculty success.

“Georgia State’s ability to attract a candidate of Dr. Blake’s reputation speaks to just how much the university has achieved in recent years,” said Regent Neil L. Pruitt Jr., search committee chair. “Georgia State is my alma mater, and I’m proud to be able to bring forward a finalist of Dr. Blake’s caliber. Georgia State is important to Atlanta, our state and the entire Southeast as an economic engine and an institution of higher education. Dr. Blake will serve its campuses well.”

Before Miami, Blake was associate dean of engineering, research and graduate studies and professor of computer science and engineering at the University of Notre Dame, where he oversaw the doubling of research awards and expenditures in the College of Engineering and grew the graduate program by more than 30 percent.

His career in academia began as an adjunct professor at Georgetown University where he earned promotions to assistant professor and associate professor with tenure. He was selected to serve as chair of the Department of Computer Science and the inaugural director of graduate studies in computer science.

As a researcher, Blake served as advisor or co-advisor to 15 postdoctoral fellows and graduate students and more than 30 undergraduate researchers. He has authored or coauthored more than 200 journal articles, books or book chapters and refereed conference or workshop papers. He is best known for his contributions to adaptive, inter-organizational workflow for web-based services and systems. He served on five National Academies’ studies or committees and on the National Science Foundation’s Advisory Committee for the Computer and Information Science and Engineering Directorate. His research has been funded by more than $12 million in sponsored awards from various governmental and commercial organizations.

“As a native Georgian, I am honored and humbled to be named finalist for the presidency of Georgia State University – the largest institution of higher education in my home state,” Blake said. “With the incredible progress made over the past decade, Georgia State has an outstanding reputation combining excellence in both research and accessibility. It’s built for the next generation of students, scholars and practitioners, and I would be delighted to have the opportunity to contribute to the next chapter of the institution.”

The Board of Regents will take action on the position at a future board meeting, no sooner than five days from naming a finalist. 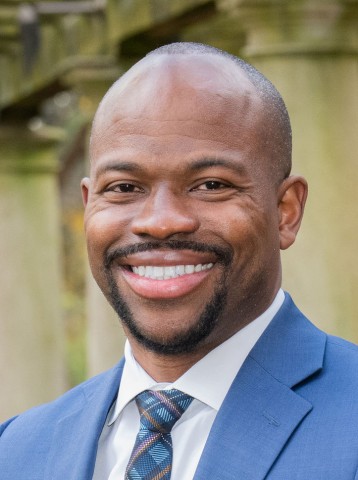