A winner at every stage of his coaching career, Eliah Drinkwitz – considered one of college football's top offensive minds – has agreed to become the 33rd head football coach at the University of Missouri.  Drinkwitz takes over at Mizzou following an impressive 2019 season at Appalachian State, where he led the 20th-ranked Mountaineers to a 12-1 record and a Sun Belt Conference Championship.  Full financial details of Drinkwitz' contract will be released pending completion of the human resources process.

Drinkwitz's offensive acumen has been a key element in his teams winning five conference championships while compiling a perfect 8-0 bowl game record in 10 seasons at the FBS level.  The combined record of his teams from 2010-19 is 98-34 overall (74.2%), including a 57-22 conference mark (72.2%).

The 2019 season saw Drinkwitz turn in one of the most impressive FBS head coaching debut seasons ever.  His Mountaineers set a Sun Belt record with their 12 wins, and also set the mark for the best regular season in conference history (11-1).  They claimed the Sun Belt championship with a 45-38 win against Louisiana on Dec. 7.

This season saw App State become the first-ever Sun Belt program to earn a Top 20 ranking in the Associated Press poll, while also becoming the first team in league history to receive an in-season ranking in the College Football Playoff poll.  Drinkwitz's team also made history in 2019 with a pair of Power 5 road wins (at bowl-eligible North Carolina, and later at South Carolina) – making them the first-ever Sun Belt team to register two Power 5 wins in a season.  In all, the Mountaineers claimed an FBS-best six road wins this season en route to becoming the first-ever 12-win team among North Carolina's FBS members.

App State proved to be one of the nation's most balanced teams in 2019, thanks in large part to an efficient offense that ranked ninth nationally in scoring (39.4 points per game), coupled with a stingy defense that ranked 22nd nationally in points allowed (20.2 ppg).  The Mountaineers also excelled in the critical turnover category, ranking eighth nationally in 2019 with a plus-12 turnover margin.  App State junior RB Darrynton Evans was named the Sun Belt Offensive Player of the Year, after rushing for 1,323 yards and 17 touchdowns.

Prior to App State, Drinkwitz spent three years as offensive coordinator and quarterbacks coach for record-setting North Carolina State teams (2016-18), after excelling in a similar role at Boise State for two years (2014-15), where the Broncos won the Mountain West title in 2014 and finished 12-2 and ranked 16th nationally. In 2015, Drinkwitz was promoted to offensive coordinator and quarterbacks coach, and he helped the Bronco offense rank in the top 15 nationally in points (39.1) and yards (501.3) per game.

Before Boise, Drinkwitz was a key figure in back-to-back Sun Belt championships in 2012-13 as running backs coach and co-offensive coordinator at Arkansas State.  He got his first taste at the FBS level in the Southeastern Conference, as he served as a quality control assistant at Auburn for the 2010-11 seasons.  The Tigers won the SEC in 2010, and went on to the BCS Championship that season with a perfect 14-0 record.

The Wolfpack offense had six players selected in the 2018 and 2019 NFL Drafts combined, including record-setting QB Ryan Finley, who was a fourth round selection in 2019 by the Cincinnati Bengals.

A six-game home schedule is on tap for Drinkwitz and his Tigers in 2020.  Fans looking to renew their season tickets or purchase new season tickets can do so online at www.MUTigers.com/CoachDrinkwitz.  Fans can also contact the Mizzou Ticket Office with questions at 1-800-CAT-PAWS (884-PAWS locally). 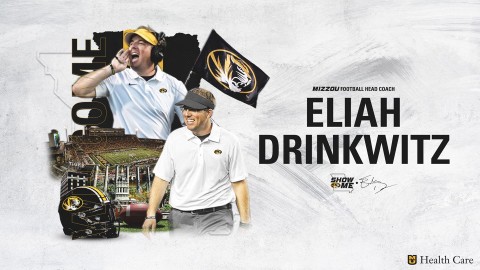