Valparaiso, Indiana – A dynamic rising star in collegiate athletics administration with a focus on the holistic student-athlete experience, Charles Small, Ed.D., is the next Director of Athletics at Valparaiso University, as announced by University President José D. Padilla, J.D., on Thursday, May 19, 2022. Small, who will officially assume the role on July 1 and will be Valpo’s first Black Director of Athletics, most recently spent the last four years on the athletic department’s senior staff at Iowa State University.

“I’m thrilled to welcome Dr. Charles Small to Valparaiso University,” Padilla said. “He will be a great asset to Valpo Athletics programs, our student-athletes and the larger Valpo community. His experience in Division I basketball and at the many levels of administration in collegiate athletic programs makes him a perfect fit for the Athletic Director position. Charles is a man of faith who brings a great deal of knowledge and energy to Valpo Athletics.  He comes with the strong endorsement of Jamie Pollard, Iowa State’s AD and one of the deans of athletic directors nationwide. I look forward to seeing Valpo thrive under Charles’ leadership.”

Through the search process, Valpo was focused on finding a Director of Athletics who would lead the Beacons to the next level on the playing field while embracing the University’s faith-based mission and tradition of academic excellence. The next Director of Athletics will lead a department that prepares student-athletes to lead and serve through exceptional experiences in athletics, doing so while maintaining the department’s core values of student well-being, character & integrity, stewardship and respect.

It became clear that Small is an ideal fit to lead Valpo Athletics. Through his total commitment to the student-athlete experience — an experience he enjoyed firsthand as a Division I men’s basketball player at the University of Pittsburgh — Small’s work in intercollegiate athletics has unfailingly enabled student-athletes to reach their full potential — in competition, in academics, in service and in career attainment.

“I am honored to be named Director of Athletics at Valparaiso University,” Small said. “This is a tremendous opportunity to join President Padilla’s leadership team and work for a proven leader with a longstanding career in higher education and a leader with a history of remarkable impact in a range of professional settings. Valparaiso University’s legacy of preparing students to lead and serve in both church and society aligns with my core values. I look forward to embarking on a journey with our coaches and administrators to make a concerted effort to help Valpo student-athletes flourish holistically and promote synergy among the Valpo stakeholders to achieve comprehensive excellence.”

Small joins Valpo from Iowa State University, where he has spent the last four years (2018–present) as Senior Associate Athletic Director for Student Services. In his role at Iowa State, he is the lead administrator for sports medicine, compliance, strength & conditioning, former student-athlete relations and academic support services for student-athletes. Small serves as sport administrator for the Cyclones’ men’s basketball and wrestling programs.

A key member of the Iowa State athletics senior staff, Small headed up the department’s diversity, equity and inclusion strategic action plan, experience that will serve him well as he implements steps in Valparaiso University’s DEI Action Agenda that relate to Valpo Athletics. During his time with the Cyclones, he created a student-athlete and letterwinner engagement unit, as well as a position for a mental health and educational enrichment coordinator.

Small’s dedication to building campus partnerships was highlighted when Iowa State University President Dr. Wendy Wintersteen appointed him as the University’s Interim Vice President for Diversity, Equity & Inclusion for the fall 2021 semester. He is also a Deputy Title IX Coordinator and represented the athletic department on the ISU Well-being Leadership Alliance.

Prior to arriving at Iowa State, Small worked for four years (2014–2018) at the University of Arkansas. He ended his tenure with the Razorbacks as the department’s Associate Athletic Director for Academic Services, where he served as lead administrator for academic support services for student-athletes and as a member of the athletic department’s executive staff. He also worked as a Deputy Title IX Coordinator on campus.

Small originally joined the staff at Arkansas as Director of Student-Athlete Development. He was a member of the Office of Student-Athlete Success (OSAS) leadership team, overseeing the day-to-day operations of the student-athlete development program and serving as advisor for the Razorbacks’ Student-Athlete Advisory Committee. He represented the athletic department on the RazorCAT team, collaborating with units in the Division of Student Affairs to discuss student issues and wellness concerns. He was promoted to Assistant Athletic Director in 2016 before earning his promotion to Associate Athletic Director in 2017.

Prior to his tenure at Arkansas, Small worked at the University of New Orleans (2013–2014) as Assistant Athletic Director for Student-Athlete Enrichment. While at New Orleans, he oversaw academic support and life skills programming, was the sport administrator for men’s and women’s track & field and was the lead administrator assisting the athletic director in developing a strategic plan.

Small started his work in intercollegiate athletics at his alma mater, the University of Pittsburgh. He ascended to Academic Counselor for Football and Women’s Track & Field (2010–2013) after spending time as Assistant Director of Life Skills (2007–2010) and as a Graduate Assistant for Student Life and Compliance (2006–2007).

In addition to his athletics work, Small has served as an adjunct faculty member in the School of Social Work at both Pitt and Arkansas. He is currently a member of the National Association of Academic Advisors for Athletics (N4A) and the National Association of Student Personnel Administrators (NASPA), and he is a graduate of the NCAA Dr. Charles Whitcomb Leadership Institute and the Sports Management Institute.

Small also worked with two nonprofit organizations in Ames, Iowa. He was a member of the foundation board of trustees for Youth and Shelter Services (YSS) and a member of the board of directors for the Assault Care Center Extending Shelter & Support (ACCESS).

Small earned his Doctor of Education from the University of Pittsburgh in 2013 after previously receiving his Master of Social Work (2007) and his Bachelor of Arts in Social Work (2006) from Pitt. As an undergraduate at Pitt, Small was a four-year member of the men’s basketball program, earning three letters. He was part of teams that advanced to the NCAA Tournament four times, including two appearances in the Sweet Sixteen, and won a pair of Big East championships.

Small is the 16th Director of Athletics all-time at Valparaiso University and just the third person to fill that role in the last 43 years. A native of Detroit, Small and his wife, Celeste, have two sons, Dominic and Aiden.

What They’re Saying About Small

“I am so excited for the Valparaiso University community. Charles Small is the perfect fit to lead the Beacons as their new Director of Athletics. Charles is a rising star in our profession. His commitment to the core values of higher education and the student-athlete experience, his passion for collegiate athletics and his time as a student-athlete allow Charles to be an incredible administrator. The coaches and staff are going to really enjoy his infectious smile, his amazing listening skills and his ability to inspire others to do great things. I can’t wait to see the positive impact that Charles is going to have on the Valparaiso community.”

“The incredible thing about Charles is the commitment that he has to the success of the student-athlete. During my time with him in the Big 12 Conference, it was obvious that no duty or task that would enhance the student-athlete experience would ever go undone under his watch. He will be a fantastic addition to the Beacons.”

“[On behalf of the Board of Directors,] We are delighted to welcome Charles Small to the Valparaiso University family. Charles’ core values and vision for athletics are closely aligned with the University’s mission to lead and serve. He is an excellent fit for Valpo due to his commitment to the holistic development of the student-athlete, the integration of athletics into the academic community and his drive to achieve and succeed. We look forward to the future for Valpo Athletics under Charles’ leadership.”

“Charles demonstrates character, integrity and work ethic on a daily basis. His commitment to serving student-athletes and empowering them to unlock their potential is inspiring. He’s thoughtful and always has a plan. Charles will cultivate meaningful relationships to take Valparaiso to new heights. Slam dunk hire!”

“Charles has a unique ability to communicate effectively with student-athletes, coaches, administrators and others which allows him to have a great rapport with all parties while delivering important information in a timely manner. He is someone I call regularly to get advice on how to handle student-athlete welfare and other general athletic administration issues in my current role. I have learned a great deal from Charles and I am a better administrator today because of my interactions with him. He is a true professional.”

“One of the more satisfying experiences as a coach is to see former players develop into strong fathers, responsible citizens and successful professionals. Dr. Charles Small is a great example. He was a walk-on student-athlete at the University of Pittsburgh from 2002–2006 who took pride in his role of helping teammates get better every day in practice. He developed into a leader who helped build team cohesion and served as a great resource, advocate and friend for everyone on the team. His hunger to learn was beneficial in earning a doctorate degree from the University of Pittsburgh. Now he utilizes college athletics to help current student-athletes achieve their dreams. Charles demonstrated a competitive spirit and willingness to sacrifice for the team. He earned my trust and gained credibility as a student-athlete. I am proud of what he has accomplished and how he positively represents our program.”

“Dr. Charles Small is a wonderfully talented administrator. He has demonstrated a unique balance of making sound decisions, setting an appropriate work tempo and utilizing leadership skills to achieve his units’ goals. Just as importantly, he utilizes his past experiences as a NCAA Division I men’s basketball student-athlete to connect with current student-athletes and specializes in building meaningful relationships. Coaches respect his solution­oriented approach. His intellectual curiosity and collaborative spirit enhance his ability to find creative solutions to complex issues.”

“Dr. Charles Small is one of the best people I have the pleasure of knowing and working with in this industry. His academic background allows him to approach people and situations with researched knowledge, but his humanistic heart affords him the opportunity to show his care and empathy to everyone he works with, allowing student-athletes and staff to trust and appreciate him. Additionally, Dr. Small believes in uplifting and helping those around him. He serves as a mentor to not only those who are “rising stars” in the business, but also his peers and colleague. We are fortunate to have someone like Dr. Small in our world of college athletics who will uphold integrity in everything he does, and hold others to the same standards. I’m thankful to call Dr. Small my friend and colleague.”

“Dr. Charles Small has shaped a thoughtful career course that has enabled him to gain valuable experience in identifying and understanding requisite building blocks for success by student-athletes. His creation of service-learning programs and his constant pursuit of engaging student-athletes in ways that will help them long after college is a hallmark of Dr. Small’s commitment. Dr. Small takes an extended view of student-athletes’ needs. He projects learning and experiences that are lifelong in scope and works to instill in student-athletes values that endure. Dr. Small also seeks balance. He wants to see student-athletes succeed in competition, but equally high on his list is success in learning and in subsequent life.” 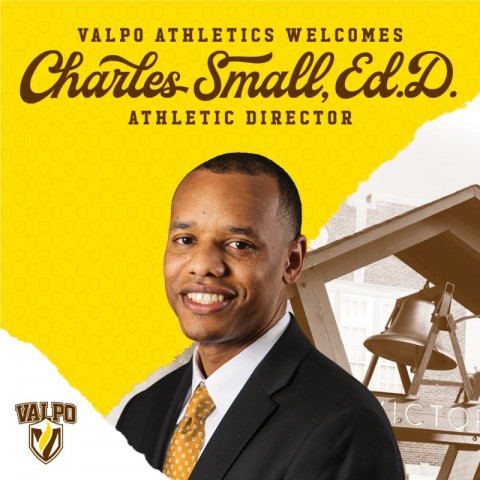