WASHINGTON - GW Director of Athletics Tanya Vogel proudly named today Chris Caputo as Head Coach of The George Washington University's men's basketball team. Caputo comes to the District as the next step in a coaching career that spans more than two decades and has taken him to a Final Four and most recently the Elite Eight of the 2022 NCAA Tournament.

"After a thorough search and identification of numerous highly-qualified coaches, both sitting head coaches and assistants, Chris rose to the top," said Vogel. "We set out to find someone who understands what it will take to be successful here and embrace the ideal of a student-athlete, and Chris demonstrated that capability. Combined with his long-tenured success coaching some of the best college basketball players in the country who have gone on to successful careers both in basketball and in life, his recruiting acumen, knowledge of the DMV and international recruiting space, Chris is primed to build a sustained winner in Foggy Bottom. I am excited to welcome Chris and his family - Julie, and their daughters Lily and Charlotte - to our special community."

As the world of college basketball continues to evolve, Caputo has exhibited a masterful ability to adapt in an ever-changing landscape. Through player development skills honed after more than 20 years in the business, plus a thorough understanding of how to augment a program through the transfer portal, he placed Miami in a position of success as Associate Head Coach in that program's recent March run. As co-pilot with Final Four coach Jim Larrañaga, Caputo prioritized a style of play that put five players on the court who can be interchangeable and versatile. Caputo recently noted that "putting five guys on the floor that can pass, dribble and shoot makes it very difficult to defend at times when we're able to spread you out. The ability to share the ball, be selfless, (previous teams) have really taken to that."

"My family and I want to thank President Wrighton, Tanya Vogel and the entire GW family for giving me this opportunity," said Caputo. "I would not have taken this role if I didn't believe with my whole heart that we are going to build a program the whole university community will be proud of. The tradition is here, the desire to win is here, the fanbase is here, and that's a great place to start. The experiences I've had in my career have led me to GW, and I could not be more excited to move back to the DMV and get started where I believe the best talent in the country resides. GW fans and the worldwide network that this excellent university has around it are going to love what they see from our program."

Miami's Associate Head Coach since 2015, Caputo has had experience in every area that is required to build a winning program. A skilled scout, recruiter and Xs and Os tactician who served as the team's defensive coordinator, he helped coach the Hurricanes to seven postseason berths, five NCAA appearances, three Sweet 16s and the Elite Eight last month. Miami was ranked as high as No. 2 in the national polls during his tenure, while numerous coaching peers and outlets have identified him as a premier assistant and soon-to-be head coaching star, highlighted by a CBS Sports poll of 100-plus college coaches who ranked Caputo as one of the three assistants in the nation most likely to someday become a coaching star. Sports Illustrated also identified Caputo as one of the top assistants ready to make the jump to a head coaching position after his Miami teams joined Duke as the lone ACC programs to have a student-athlete drafted into the NBA every year from 2016-19.

Dating back to his time with Larrañaga at George Mason, Caputo's recruiting chops have yielded success in landing the area's top talent, along with McDonald's All-Americans, Jordan Brand Classic players, and international talent from Australia and New Zealand, countries where emerging athletes have taken the basketball world by storm in recent years.

The architect of Top 25 defenses nationally, Caputo has shown his commitment to academics in his mentorship of a previous Skip Prosser Award recipient, presented annually to the top scholar-athlete in ACC men's basketball, a conference that boasts some of the finer academic institutions of higher education in the country. Graduation success has been a priority throughout Caputo's decorated assistant coaching career.

A multi-time participant in the esteemed Villa 7 Consortium, an educational symposium and networking opportunity for some of the nation's top assistants, Caputo has done everything from serving as a video coordinator, to managing databases and mailing systems, while serving in various administrative capacities.

Originally from Elmhurst, N.Y., Caputo is a 2002 graduate of Westfield (Mass.) State University with a degree in finance and economics. He was a four-year letter winner as a point guard for the Division III Owls and served as captain and earned the team's Outstanding Contributor Award as a senior. He is a 1998 graduate of Archbishop Molloy High School. 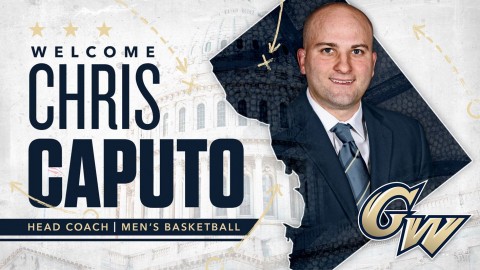