CHICAGO, IL – No stranger to the Windy City and the Missouri Valley Conference, Ashleen Bracey has been named head women's basketball coach for the UIC Flames, subject to approval by the University of Illinois Board of Trustees.

A native of nearby Oak Park, Ill., and former standout student-athlete at Illinois State University, Bracey arrives at UIC after spending the past six seasons as an assistant coach at the University of Missouri, a member of the Southeastern Conference (SEC). During her tenure at Mizzou, working alongside head coach Robin Pingeton, Bracey was instrumental in helping the Tigers reach three NCAA Tournaments and make two WNIT appearances.

"We are excited to welcome Coach Bracey home to lead Flames women's basketball," said UIC Director of Athletics Michael Lipitz. "She is an elite recruiter and skilled tactician who knows Chicago and the Missouri Valley Conference well. Ashleen exudes passion, exhibits a relentless work ethic, and cares deeply for her players, which will well serve our women's basketball student-athletes and program."

Bracey, a veteran coach who grew up only 15 minutes west of UIC's campus, expressed excitement for the future of Flames women's basketball.

"I am truly honored and humbled to be named the head women's basketball coach at UIC," said Bracey. "I am so thankful for such an amazing opportunity to come home and lead these talented young women at a world-class institution. Michael Lipitz has a vision for UIC Athletics and Flames women's basketball that I believe in. We can confidently create a winning culture here and build a championship-caliber program that the City of Chicago will be incredibly proud of.

"I am grateful to Chancellor Michael Amiridis, Michael, Farrah Manthei, and the rest of the administration for putting their trust in me to lead the Flames," added Bracey. "I also would like to thank my family, friends and mentors like my college coach and former boss Robin Pingeton who have helped shape the woman and coach I am today and led me to this opportunity here at UIC."

Bracey played a pivotal role in Missouri's recruiting efforts during her time in Columbia. Of note, she led efforts to sign the nation's 12th-ranked recruiting class in 2019, regarded as the best in program history. The group included Aijha Blackwell, the top prospect in the state of Missouri and No. 9 in the country, as ranked by espnW.

Mizzou won at least 20 games three times in Bracey's six seasons, including 24 victories in the 2017-18 and 2018-19 campaigns. The Tigers won 18 games in 2021-22, including an overtime thriller against No. 1 South Carolina and a road win at No. 15 Florida to close out the regular season. Bracey was responsible for developing and administering the game plan and scouting reports for both MU triumphs.

The 33-year-old Bracey cut her coaching teeth at several stops prior to arriving at Mizzou. From 2012-15, she served as the recruiting coordinator and assistant coach at UAB. She also spent time on staffs at Ball State University and Eureka College.

As a student-athlete, Bracey starred on the hardwood at Illinois State from 2006-10. A three-year starter for Pingeton and the Redbirds, she was a key contributor on three Missouri Valley Conference championship squads. During her time at ISU, Bracey and her teammates reached the postseason each year, qualifying for the 2008 NCAA Tournament and making three appearances in the WNIT, reaching the semifinals in 2009 and 2010.

As a senior in 2009-10, Bracey served as team captain and earned All-MVC First Team honors, as well as a spot on the conference's All-Defensive Team. She was selected MVC Player of the Week four times during that campaign and earned recognition on the 2009-10 MVC Scholar-Athlete Team.

She tallied 1,194 points as a Redbird and shot over 50% from the floor for her career. Her 765 career rebounds tie her for fifth most in program history. Bracey tallied 21 double-doubles in her Redbird career.

Upon graduating from Illinois State in 2010 with a degree in Criminal Justice Sciences, Bracey played professional basketball in Greece for one year prior to transitioning to the sideline as a coach.

Bracey attended Oak Park-River Forest High School, where she was a three-time All-West Suburban Conference honoree for the Huskies. Her brothers also played college basketball, Bryan (Oregon) and Chris (West Texas A&M) and went on to professional careers in Europe.

WHAT THEY'RE SAYING ABOUT ASHLEEN BRACEY:

Robin Pingeton, Head Coach at Missouri
"There are simply no words to express how proud I am of Ashleen. I have known her since she was 16 years old and it has been incredible to see her growth on and off the court. She is extremely knowledgeable and passionate about the game, has an incredible work ethic, and is just a phenomenal leader. UIC has hit a home run with this hire and there is no doubt in my mind she is going to elevate that program to unprecedented new heights."

Desireè Reed-Francois, Director of Athletics at Missouri
"Mizzou is proud of Coach Bracey for earning the opportunity to run her own program. She has had a positive impact on Tigers women's basketball for the past six seasons. Congratulations to UIC for bringing her home!"

Randy Norton, Head Coach at UAB
"Ashleen in a tenacious recruiter and has an outstanding mind for the game. I believe she will be a superstar in our game and UIC is very blessed to have her leading their program."

Steffi Sorensen, ESPN Analyst
"This is a terrific hire with Ashleen. Right away I think about her deep ties to the Midwest and the city of Chicago. She's proven that she can recruit all over the country, bringing in top-tier talent while at Missouri and coaching in one of the toughest conferences. Ashleen takes the time to get to know recruits as people first and foremost. Her ability to take those relationships and invest in a player's development on and off the floor is top notch."

Jordan Roundtree, Former Student-Athlete at Mizzou
"Coach Bracey got to Mizzou the same year that I did and it didn't take long to realize how much we had in common. I was able to learn so much from her life experience and basketball knowledge. She's a coach with an open-door policy and is always willing to talk to you about anything and everything. She takes pride in being the coach who's always in the gym doing the hard work behind the scenes with her players, helping them get better outside of practice.

Coach works overtime and puts team success first at all times. Some of the biggest games we won in my four years at Mizzou were due in large part to the preparation and game plan that coach Bracey put together. Her basketball knowledge is extensive and I know she's going to bring success to UIC!"

Derita Ratcliffe Dawkins, Assistant Vice Chancellor/Deputy AD for Student-Athlete Wellness at Arkansas
"I'm so happy that Coach Bracey is getting this opportunity to lead her own program. I know this has been a goal of hers for quite some time and I look forward to seeing what she does with the UIC program. It's been an honor to see her grow as a coach."

ABOUT UIC FLAMES ATHLETICS
UIC Athletics has been an NCAA Division I member since 1981, and will join the Missouri Valley Conference, effective July 1, 2022. The Chicago-based institution is a member of the University of Illinois System, with over 300 of the nation's best and brightest student-athletes competing in 18 sports. The Flames have claimed 75 conference championships and earned 47 NCAA postseason appearances over the past 40 years, during which UIC coaches have earned 55 Coach of the Year honors. In addition, the Flames have claimed 82 Conference Player of the Year Awards and 20 student-athletes have been honored with All-America status. In the classroom, UIC student-athletes excel at an elite level, with an active streak of 14 consecutive semesters of a 3.0+ department-wide GPA and a 91% Graduation Success Rate. 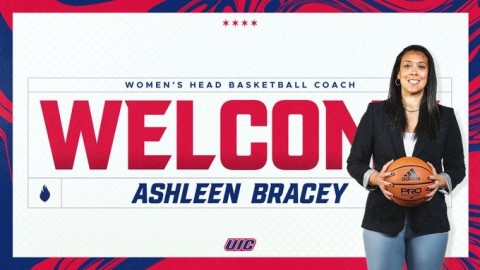