Director of Athletics Doug Gillin announced Thursday that Dustin Kerns has agreed to become the 22nd head coach in App State men's basketball history, pending approvals by the University Board of Trustees and the North Carolina Board of Governors.

Kerns, who oversaw a dramatic turnaround in two seasons as head coach at Presbyterian College, will be formally introduced at a 1 p.m. press conference Friday on the fifth floor of the Ricks Athletics Complex. The event is open to the public and will be streamed live on Facebook (AppStateSports).

"This is a great day for the Appalachian Family and our basketball program," Gillin said. "We are excited to welcome Dustin, Brittany, Emory and Riggs to Boone. Dustin is a highly regarded young coach who has worked with strong basketball programs and has done an impressive job as the head coach at Presbyterian. He has a clear vision for success at App State and is committed to excellence academically, competitively, socially and for the well-being of our student-athletes. I'm excited about the future of Mountaineer basketball."

A native of Kingsport, Tenn., Kerns inherited a Presbyterian program that had yet to achieve a winning record in 12 seasons at the Division I level and was coming off a five-win campaign in 2016-17. He immediately led the Blue Hose to a five-win improvement in his first year before breaking through in 2018-19.

Kerns guided the Blue Hose to their first winning record (20-16) and first postseason appearance (CIT) as a Division I program in just his second year on the job. PC's 12-3 record at home and 9-7 mark in Big South Conference play are also its best since joining the Division I ranks. Kerns' team advanced to the quarterfinals of the CIT after garnering road wins at Seattle and Robert Morris.

"Our family is honored and humbled to be joining the Appalachian State University family," Kerns said. "We are so excited to raise our family in Boone and be a part of the community. There is truly something special in these mountains that brings people together with immense pride and touches people's lives. I want to thank the Board of Trustees, Chancellor Sheri Everts, Doug Gillin, Brittney Whiteside and the rest of the App State team for their dedication and genuine pursuit of greatness in academics and athletics. I am so excited to meet the team, connect with former players, and begin our journey together."

Highly regarded for both his recruiting acumen and player development, Kerns and his staff mentored 2018-19 Big South Freshman of the Year Adam Flagler, who led the Blue Hose with 15.9 points per game and a school-record 108 3-pointers made. In Flagler and forward Cory Hightower, PC boasted two of the league's five all-freshman honorees. Point guard Davon Bell led the league in assists (6.5/game) and made the All-Big South second team.

Presbyterian established itself as one of the premier 3-point shooting teams in the country in 2018-19. The Blue Hose's 394 total trifectas currently rank second-most in the nation behind NCAA Sweet 16 contender Auburn. Kerns' team didn't just shoot the ball prolifically, but also efficiently. The team's 3-point field-goal percentage ranks among the top 25 nationally, and PC's assist-to-turnover ratio of 1.58 is fifth-best in the country. For his efforts this past season, Kerns has been named a finalist for the Jim Phelan National Coach of the Year and for the Hugh Durham Mid-Major National Coach of the Year. The winners of each award will be announced next weekend at the Final Four.

A 2002 graduate of Clemson, Kerns climbed the coaching ranks on staffs with Buzz Peterson at Tennessee, Mike Young at Wofford and Kerry Keating at Santa Clara.

From 2013-17, he served as associate head coach at Wofford, helping the Terriers claim back-to-back Southern Conference Tournament titles and NCAA appearances in 2014 and 2015. He was instrumental in the development of guard Fletcher Magee, who this year broke the record for most 3-pointers in NCAA Division I history. Kerns received national recognition as one of college basketball's top assistant coaches and recruiters, earning the No. 4 Low-Major Recruiter ranking from CoachStat.net and the No. 20 Mid-Major Assistant Coach ranking.

Kerns was an assistant coach at Santa Clara for five seasons from 2008-13, where he helped the Broncos claim the third-most wins in the West Coast Conference behind Gonzaga and Saint Mary's during that span. He helped Santa Clara win 26 games in 2012-13 and capture the College Basketball Insider (CBI) title, as well as a 24-win season and a CIT title in 2010-11. He had previous stints as director of operations at Santa Clara (2007-08), assistant coach at Wofford (2004-07), graduate assistant at Tennessee (2003-04) and director of basketball operations at Tennessee Tech (2002-03).

During his coaching career, Kerns has seen 28 players play professionally.

Kerns graduated from Clemson in 2002 with a degree in secondary education. As an undergraduate, he worked as a student assistant for the men's basketball program and was selected to coach at the prestigious Michael Jordan Flight School for three summers from 2001-03.

Kerns is married to the former Brittany Wright, and the couple has a daughter, Emory, and a son, Riggs.

What They're Saying about Kerns:

"This is a great day for Appalachian State University. Dustin Kerns is an outstanding basketball coach who will build a winning program in Boone. He will instill a culture and style of play that all Mountaineer alumni and fans will be proud of. As a former player, Appalachian State is a place I am very passionate about, and I am thrilled we will have a coach of Dustin's caliber leading our basketball program."

"I am so happy for DK and App State. The Mountaineers are welcoming a great family, a gentleman and a wonderful basketball coach. He is directly responsible for many of the great ones we have had here. His dogged determination on the recruiting trail aligns well with his fiercely competitive approach to coaching basketball."

"The relentless pursuit of greatness is an anomaly these days. But every once and awhile, I meet a person with that special something. That something that can elevate not only themselves, but more importantly, the people around them. Dustin Kerns has what it takes to elevate people. That within itself is a skill that can't be taught. It's a gift." 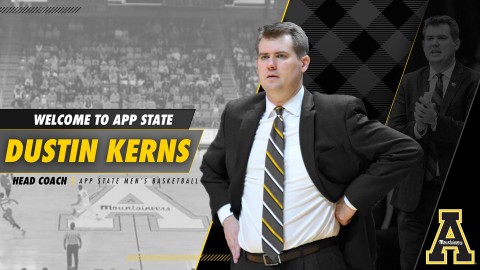