During Agugua-Hamilton’s three years heading up the Lady Bears program, Missouri State went 74-15 including a 46-6 record in Missouri Valley Conference play. Her teams won two MVC regular-season titles (2020, 2021) and have played in the past two NCAA Tournaments (2021, 2022), including a Sweet 16 trip in 2020-21. In her inaugural season, Missouri State appeared headed to the NCAA Tournament with a 26-4 record when the postseason was canceled due to the pandemic.

“We are thrilled and very fortunate to have recruited Coach Mox to UVA,” Williams said. “She is a gifted teacher, a skilled tactician of the game and a person who cares deeply about her players and vice versa. Her teams play with tremendous tenacity and confidence. Coach Mox has a reputation for recruiting and developing talent. While these qualities are necessary to build a competitive program, we have been most impressed with Coach Mox as a person. Her integrity, work ethic, passion for education and determination to build something special here at UVA is inspiring.”

This year’s Missouri State team went 25-8 and was a No. 11 seed in the NCAA Championships. The Lady Bears defeated Florida State 61-50 in the tournament’s inaugural First Four before bowing out against No. 6 Ohio State in the first round of the tournament.

The victory against the Seminoles was one of nine she had against Power Five opponents during her three seasons at MSU. That list includes wins versus USC, Virginia Tech, Missouri (three), Maryland, Minnesota and Oklahoma.

“I am overjoyed and thankful for this tremendous opportunity to lead this group of young women at one of the best academic and athletic institutions in the country,” Agugua-Hamilton said. “I was immediately drawn in by Carla Williams’ vision for the women’s basketball program and the athletic department as a whole. I am certain I will thrive under her leadership. As a Virginia native, UVA is a dream come true for me. I could not be more excited to be HOME!”

The Lady Bears went 26-4 overall in Agugua-Hamilton’s first season (2019-20), setting a school record for regular-season victories and making Coach Mox one of 33 rookie head coaches in Division I history with at least 26 victories. She was the second first-year head coach in MVC history to be named Missouri Valley Coach of the Year, and the first to win an outright regular-season title in their debut season.

Missouri State ended the shortened 2019-20 season ranked 19th in the Coaches Poll, 23rd by the AP, and eighth in the NCAA RPI, the highest finish ever for an MVC team in that metric. The Lady Bears spent nine weeks rated fourth or better in the RPI throughout the season, ascending to the No. 1 spot for seven consecutive days in January, and went 15-0 at JQH Arena for the school’s first perfect home season since 2003-04.

The Lady Bears built on that immense success in 2020-21, finishing with a 23-3 record and advancing to the Sweet 16 of the NCAA Tournament. MSU extended its ranking streak in the Coaches Poll to 35 consecutive appearances and finished 14th, its highest ranking since 2001. Missouri State matched the program’s best-ever NCAA Tournament seed with a No. 5, defeating UC Davis and Wright State in the postseason before falling to No. 1 overall seed Stanford in the Sweet 16 to end a 19-game win streak. Missouri State also posted the first perfect conference (16-0) and road (11-0) records in school history.

Agugua-Hamilton’s MSU teams were extremely tough to beat at home. The Lady Bears rolled up a 36-2 record in Springfield. They were also among the nation’s top teams in terms of defense and rebounding.

The first African-American female head coach for any sport at Missouri State, Agugua-Hamilton is a 20-year veteran of Division I women’s basketball, including five seasons as a player at Hofstra and four coaching stops. Prior to taking over the Missouri State program, she was on the staff at Michigan State from 2013-19, the last four years as associate head coach.

During her six-year stint at Michigan State, Agugua-Hamilton helped the Spartans to four seasons with at least 21 wins, four NCAA Tournaments, one WNIT bid, and the 2014 Big Ten regular-season title. She was integral in signing four consecutive top-35 recruiting classes, including her last class of Spartans that was the seventh-ranked group in the nation. She recruited and coached 26 all-conference players and a pair of top-10 WNBA draft choices in Lansing. She also earned four victories as interim head coach in 2017 and aided the Spartans to an overall 125-72 record and 58-44 Big Ten mark in six years.

Prior to Michigan State, Agugua-Hamilton was the top assistant and recruiting coordinator at Old Dominion for two seasons, helping the Monarchs to an eight-win improvement and WNIT berth her second year in 2012-13. She recruited and coached eight All-CAA selections and one WNBA draft pick while at ODU.

Before her time at ODU, Agugua-Hamilton worked at Indiana for two seasons (2009-11) as an assistant coach and recruiting coordinator, and at Virginia Commonwealth for three years, as a graduate assistant (2006-07) and assistant coach (2007-09). Coach Mox helped VCU to a pair of 26-win seasons and the school’s first NCAA Tournament appearance during her two years as a full-time assistant.

Agugua-Hamilton is a 2005 graduate of Hofstra University, where she averaged 10.2 points and 6.0 rebounds over a 95-game career. She is the Pride’s career field goal percentage leader at .551 and graduated with the top three single-season field goal percentage marks in school history. A four-year team captain, she was a second-team All-Colonial Athletic Association pick in 2004, and helped Hofstra to a WNIT berth in 2006, the school’s first-ever postseason appearance.

She earned her bachelor’s degree in business management from Hofstra in 2005 and received her master’s degree in sports leadership and administration from VCU in 2007.

Agugua-Hamilton married Billy Hamilton in 2017. The couple has a son, Eze, born in April 2018. 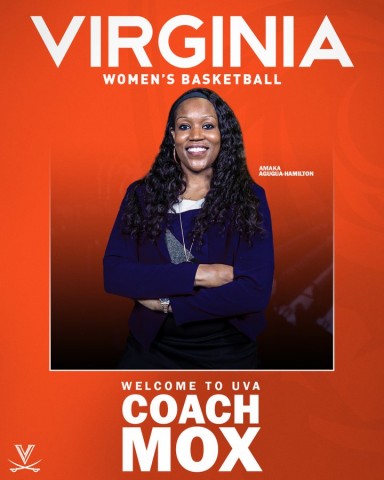