Keen is the 31st football coach in program history. He replaces Larry Kindbom, who retired after 31 seasons.

Keen arrives on the Danforth Campus after spending the past six seasons at Eastern Michigan University. He served as the team's offensive coordinator and quarterbacks coach the last three seasons. Prior to taking over the offense, he was the Eagles special teams coordinator and tight ends coach for three years.

"My family and I are excited about the opportunity to return home to Washington University. I want to thank Anthony J. Azama and the search committee for the opportunity and the trust to lead the football program at WashU," said Keen. "I look forward to building on the traditions that Coach Kindbom has created here over the last 31 years, and helping to take the program to new heights."

Working under head coach Chris Creighton, Keen helped the team to three Bowl appearances and was a part of one of the greatest turnaround stories in College Football. The 2016 EMU team tied the Football Bowl Subdivision mark for biggest turnarounds, improving on their win total from one in 2015 to seven.

EMU recorded a 6-6 record in 2019, and appeared in the Quick Lane Bowl. Under Keen's leadership, the EMU offense set the program record for touchdowns in a season (49), touchdown passes in a season (27) and passes completed in a season (313). Additionally, EMU's 379 points and 5,271 total yards of offense rank second all-time at EMU.

Keen has over 25 years of collegiate football coaching experience at different levels. Prior to EMU, he spent three seasons at Minnesota State University. Keen joined the staff in 2011 as offensive coordinator before serving as acting head coach in 2012 and 2013. He was the American Football Monthly NCAA Division II National Coach of the Year in 2012, and led the Mavericks to a 24-2 overall record in two seasons.

Keen spent three seasons as the offensive coordinator, quarterbacks and receivers coach at the University of Nebraska-Omaha, and five seasons as head coach at Illinois College.

"First of all, I want to thank Chancellor Martin, Vice Chancellor Dr. White and the search committee. We have hired a new leader for our football program who will continue the momentum of our mission to build, develop and impact scholar-champions," said Azama. "Aaron shares the belief that the athletic experience should be as impactful as the world-class WashU academic experience."

Keen spent the first eight years of his career as assistant coach (1994-2002) under Kindbom at WashU. He coached tight ends in 1994, linebackers and coordinated special teams from 1995-98, and was the offensive coordinator and quarterbacks coach from 1999-2002.

Keen was a three-year starter at quarterback for WashU, and ranks fourth in school history in passing yards (4,329) and fifth in total offense (4,083). In 1991 and 1993, he was an All-American and all-conference selection. He also received an NCAA Postgraduate Scholarship in 1994.

"Aaron graduated from WashU, played football at WashU, has experience as a head coach, and will relate well to the current and future football student-athletes," added Azama. "The 1,300 football alumni world-wide will equally enjoy Aaron's energy and vision for the program."

Keen and his wife, Michelle, have two sons, Brandon and Cody, and a daughter, Addison. 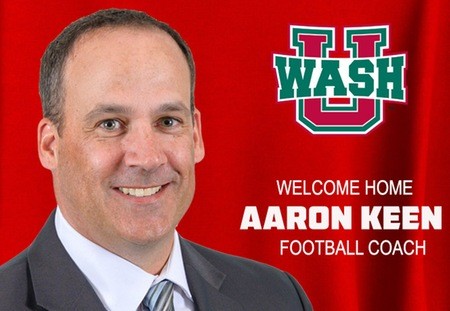